Myths, fairy-tales, legends, fables and jokes are still being told and retold today. Norway has its own treasured stories both in Norwegian and in Sami. These are documented and have a strong presence in the school curriculum. Meanwhile during the last 20 years the rapid pace of immigration has led to much more cultural diversity, and we find ourselves with a multiplicity of new storytelling traditions. However, these traditions are often invisible.In the hustle and bustle of our technological age, many people seem to forget the existence of this major building block of their own education.

In 2006, Fortellerhuset was invited to a major international Storytelling festival in Iran promoted on national television. In the preparation for the festival, Georgiana Keable (founder of Fortellerhuset) enquired several times whether it would be appropriate to tell stories in English and was told politely that this would be no problem. On arrival the storytellers were faced with an audience with almost no English skills. However the interpreters who had been provided were very gifted young people. Georgiana was inspired to work with her interpreter and develop a way of telling where the two languages are being performed together, not in the ordinary form where the interpreter repeats everything but in a more dramatic, physical and playful way. In the known context of a story suddenly it became possible for the listeners to understand a language they had never heard before.

This was very well received in Iran and the work continued in Norway.

Above: From the cover of a collection of dual language videos produced by Fortellerhuset in cooperation with Centre for mutli-ethnic cultural learning (NAFO)

The aims of our storytelling initiative are to

In 2000 UNESCO had decreed 21st February a day to celebrate our mother tongue. In 2007 ‘Mother-tongue day’ was celebrated for the first time in Norway. Susan Lyden from Stovner on the East side of Oslo invited Fortellerhuset and the event was to be held in the local library. That year it was minus 15 degrees outside and the lady from the local council with the job of publicising the event had come down with flu. All in all things didn’t look promising. Nonetheless over 1000 locals turned up and packed the library. Fortellerhuset had storytelling in Urdu, Kurdish, Tamil, Vietnamese, Farsi, French, Somali and English. The celebration of this day has been an annual tradition since then in many parts of Oslo and elsewhere in Norway. (See video below). 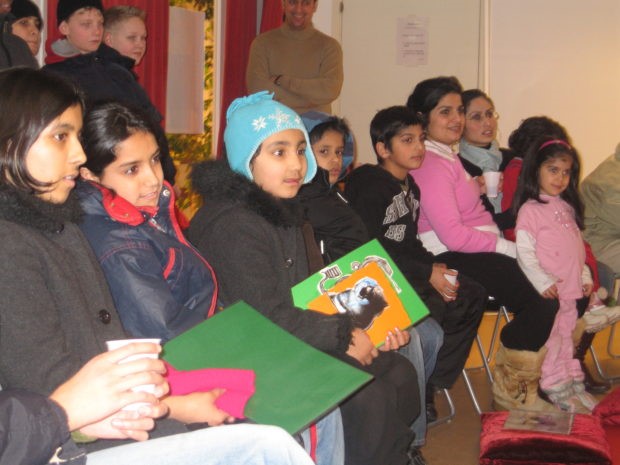 The National Center for Intercultural learning (NAFO) was excited about this new form and has supported and developed a large number of bilingual videos: see the links below. NAFO also made a gorgeous series of two-language stories where children’s drawings illustrated the stories. The Somali stories with their strong network consistently gets the most hits – one has over 54,000 viewers which is a lot for Norway. (See below)

Fortellerhuset has developed a series of performances and is still producing new two-language productions – see below – Buzak Chini – Afghanistan’s bravest goat.which are being performed at libraries, schools and kindergardens. 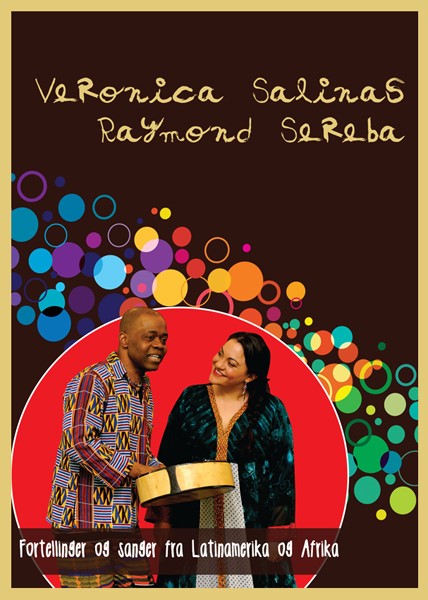 The Norwegian Arts Council has also just given funding for a 3 language project with New Norwegian, Sami and Farsi which will be combined with dance. Sagene council in Oslo has also funded a two language Somali Norwegian performance this year so interest seems to be growing.

Dual-language stories are a new form within the traditions of oral narrative art.

2. Inclusive form in a world of mass migration

Sunil Loona, senior advisor at The National Center for Intercultural learning (NAFO) says this form is a direct communication that is so very inclusive. While you may only know one of the two languages being used, suddenly you find yourself understanding an unknown language, laughing and enjoying the sounds and stories of another place along with the rest of the audience.

Two-language stories are more demanding to the performer than telling a traditional story. You need to listen and cooperate intensely with the other storyteller. Fortellerhuset has developed a lot of techniques to make the experience so much more than a translation. And when the job is done, there is so much entertainment. This new form seems to be arising in many parts of the world.

Fortellerhuset
Fortellerhuset, (The Storytelling House) the longest running professional storytelling group in Norway, have focussed on cultural diversity in storytelling since its formation in 2003. The members from 3 continents have been training minorities to increase interest and competence in their own traditions. Participants often experience that renewing their own stories and increasing their storytelling talents builds confidence and they find themselves with a strengthened identity both at work and at home. Fortellerhuset also has a big focus on Environmental storytelling and telling stories outdoors to increase love of nature and sustainability education. Building understanding about storytelling among the public has been a big focus and Fortellerhuset founded The Norwegian Storytelling Festival and the new Storytelling Radio and podcast programme, which interviews storytellers and broadcasts stories from a wide variety of cultural backgrounds.
Contact: geo.k@online.no Visit web page