No other bird in Norway and the North Atlantic illustrates better the close connection between man and nature. The wild eider fowl have during millennia been kept as semi- tame birds along the northern coasts and islands of Norway, as well as in other coastal communities in the North Atlantic, including Iceland, where the eider farming and down collection are done in a larger scale than in Norway. 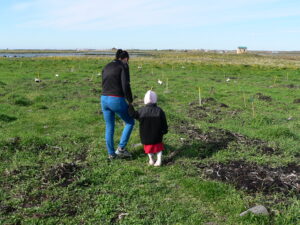 Two generations looking over the breeding grounds of the eider at a farm in Iceland. In Iceland most eider breed on more open ground, but the birds are protected by fences and other measures. Photo: Thomas Holm Carlsen, NIBIO. 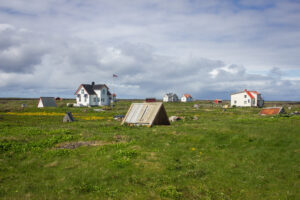 Eider houses at the island of Lånan in Norway Photo: Rita Johansen

This relationship is dependent on trust between the birds and the caretakers. If the birds learn  that the breeding grounds made by the humans are safe, they take the chance to nest and over time even prefer nesting there. Sometimes the trust is built to such a degree that the birds can be lifted and stroked without being startled.

This connection and trust is described by the Venetian trader Pietro Querini , who was shipwrecked on the island of Røst  in Lofoten (in Nordland County) in 1432:

In the spring innumeral wild ducks came and built their nest on the island, many close by the housewalls. They were so tame because they were never startled by anything, that when the lady of the house went to the nest, the ducks rose slowly and let calmly the women take the eggs they wanted.

Olaus Magnus, swedish bishop and cartographer, published an extensive work in 1555, on the history of the Nordic peoples, with both myths and more practical traditions. Here the gathering of eggs is depicted.

This old tradition, with the tending of the birds (they call themselves guardians or tenders of the bird, (Fuglerøktere/fuglevoktere in Norwegian), traditional methods of building the shelters, and preparing the precious down, is still done in the same way as before, and the tradition is still alive. 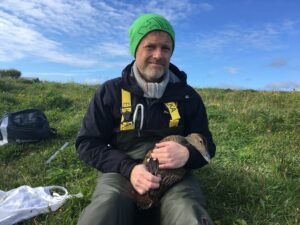 This is a good example of action-borne knowledge, passed on and modified through countless generations.  But the practise is under threat, especially in Norway: the eider fowl population is declining, the time-consuming work, often in islands that are now uninhabited, is difficult to combine with more modern work. But the traditions are still maintained and knowledge in the tradition is still passed on and disseminated to a younger generation. In this article three interlinked safeguarding projects are described: The safeguarding projects in the Unesco Heritage Area of the Vega Archipelago, the work of practitioners through the Association for Eider Fowl in Nordland County and the new project FUGLAN VEIT.

The tradition is upheld all along the coast of Northern Norway (Nordland, Troms and Finnmark counties), but special safeguarding measures have been put in place in the Vega Archipelago in Helgeland, southern Nordland County.

The Vega Archipelago cultural landscape was inscribed on the UNESCO World Heritage List in 2004. A large part of the inscription was due to the combined natural and cultural heritage of the islands, and especially the tradition of eider tending. The Committee justified its decision as follows: “The Vega Archipelago reflects the way generations of fishermen/farmers have, over the past 1,500 years, maintained a sustainable living in an inhospitable seascape near the Arctic Circle, based on the now unique practice of eider-down harvesting, and it also celebrates the contribution of women to the eider-down process”.

The many islands along the coast of Helgeland in Nordland County are ideal breeding grounds for the eider. For more than 1000 years, the islanders have gathered seaweed, laid it out to dry and then used it to make nests beneath driftwood shelters or in small houses built of stones or wood. The families have fashioned nests for hundreds of birds, made sure that the birds got the peace and quiet they needed to settle down on the nest, and ensured that neither birds of prey nor four-legged predators robbed the nests. The bird tenders in the Vega Archipelago are on the islands from April to July. 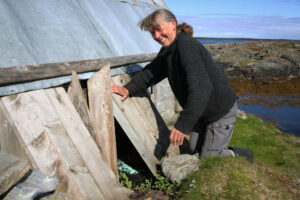 In return, they helped themselves to half of the fresh eggs and collected the eider down when the birds left the nest for the last time. The down gave them around half their annual income, so it was important to persuade the birds to nest on their property. ( Source: The Vega Archipelago World Heritage web page.)

The down is of exceptional quality and is still highly prized, although the tending of birds doesn’t have the same economic importance as before. Therefore new incentives and safeguarding measures were needed. 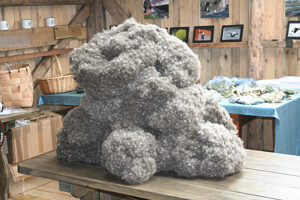 The eiderdown is lightweight and of very high quality. This is 1 kilo! Photo: Rita Johansen

Safeguarding the tradition at Vega

The Vega Archipelago World Heritage Foundation was set up in 2005 by Vega Borough Council to help to ensure that the values of the area are safeguarded. The Foundation is also intended to coordinate the world heritage work locally.

One way of safeguarding the practice is to provide an economic incentive. 20-30 of the tenders receive a yearly grant by the foundation for tending 100 eider nests each.

Dissemination of the tradition and techniques is also important. The tradition is shared both through the World Heritage Centre, local exhibitions, and guiding. The bird tenders themselves also have guided tours. Efforts for reducing the predator population and predation pressure is also undertaken. 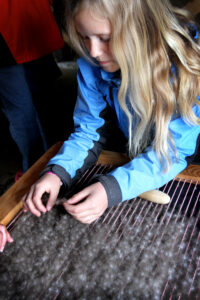 One important activity is the involvement of the younger generation. The 6th grade at Vega Primary and Secondary School take two trips yearly to the bird tenders in the islands. The first trip is to learn how to prepare the nests . During the second trip they come to see the nesting birds and learn how to collect and clean the down. 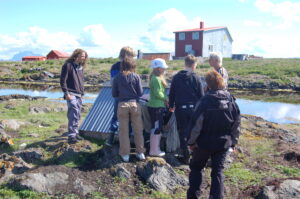 The Association for Eider Fowl -Organizing the practitioners

The Association for Eider Fowl in Nordland County was established in 2003. The objective was to gather the bearers(keepers) and practitioners of the craft of eider fowl keeping and down gathering and preparation.

The aim is to safeguard the tradition. The association has around 50 members as of 2022. Important collaborators are The Vega Archipelago World Heritage Area and World Heritage Center, The regional museum of Helgeland and The Friends of the Vega Islands.

The association is trying to safeguard the tradition with several different measures:

-Practical courses are held to learn new practitioners the tradition and craft. Some of the knowledge is about practical crafts and techniques, other parts of the knowledge are even more intangible: stories and knowledge about the connection between the birds and their environment, and how to properly interact with the birds.

-A collaboration with schools is also important to introduce the younger generation to the tradition.

-Introducing measures to combat predators in the islands.

-Work for a proper economic compensation for the practitioners for their work.

-Information work, to share the generation`s old knowledge on how to properly behave when the birds are breeding. To safeguard the eider fowl is a large part of the safeguarding measure of this tradition. The association work for the best possible management of the islands´ environment.

The association is also working to gain more acceptance of the value of the traditional knowledge about nature that has been passed down through generations of bird tenders. 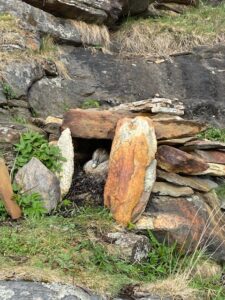 The future of eider fowl tending

Many of the safeguarding measures have had good effect, especially in the Unesco area. But the tradition is still under pressure. The eider fowl population is declining along most of Norway´s coast and common eider  is in 2021 considered vulnerable (VU) in the national inventory of species (Artsdatabanken). Recruiting new practitioners to the tradition is also of great importance. (Editors comment)

A new research project tries to gain new insight through the traditional knowledge of the communities tending the eider fowl. This tradition is varied, with different methods of tending and harvesting across the North Atlantic.

The newly started project FUGLAN VEIT (2021-2024) is led by UiT- the Arctic University of Norway, in collaboration with the Sámi University of Applied Science and NINA, and includes partners in Vega, Vardø and Porsanger. The partner locations represent a diverse history of traditional utilization of seabirds, including the sea Sámi practices.

Collaboration between practitioners and scientists

The main objectives of FUGLAN VEIT are to generate new knowledge and public awareness about seabirds as part of the coastal heritage, and to improve and safeguard the nesting situation for red-listed and endangered coastal seabirds, through new alliances and collaboration between scientific experts and local knowledge-holders.

The project also accesses a rich archive from the 1970s, the Seabird Project (Tromsø Museum), which contains several hundred interviews and thousands of photos, where people along the entire North-Norwegian coast describe how their local seabird practices, both for care, subsistence and income. This archive will be facilitated and used in local workshops at the three partner sites as a tool for remembrance and reflection of changes, in collaboration with artists, families and local seabird practitioners. Nesting workshops will also be carried out to emphasis the practical work and skills of eider and seabird tending. 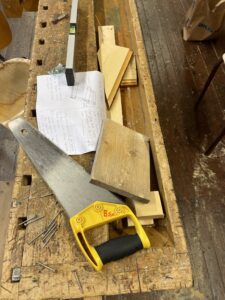 Picture: The making of nesting boxes are well under way in Porsanger. Photo: Mearrasiida 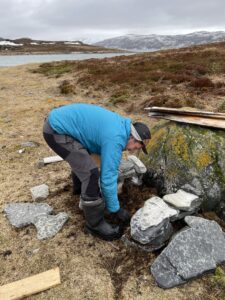 Preparing an eider house in the Porsanger fiord Photo: Mearrasiida

National and international surveillance programmes (SEAPOP, SEATRACK) provide important information about seabirds. But the traditional knowledge of seabird tending has not been valued enough as a resource.

Different activities are planned for sharing and disseminating knowledge and making use of this traditional knowledge to gain insights into sustainable development and co-existence between humans and birds. 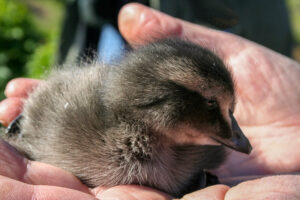 The relationship between eider and man is exceptional, and is build on a strong understanding and respect for the natural environment. The project wants to lift the status of the traditional knowledge to give new insight into sustainable management. Eider chick at the island of Lånan Photo: Rita Johansen

A video from the islands in the Vega archipelago with the most extensive egg and down- traditions (these islands were called “egg- og dunvær” in Norwegian) Link: En hyllest til ærfuglene på Lånan /A tribute to the eiderducks of Lånan – YouTube

The Sea Sámi of Northern Norway also have a similar tradition. The Mearrasiida Competence Centre in Porsanger has collected the intangible heritage and traditional knowledge of the fiord, including the keeping of eider fowl. Link: Mearrasiida – FORSIDEN

Norwegian Institute of Bioeconomy Research (NIBIO) has been involved in projects concerning eider duck and people in Norway and several other countries, including The Faroes, Iceland and Greenland. Contact person: thomas.holm.carlsen@nibio.no

The tending of eider has a long tradition in Iceland. The tending of eider or farming of eider, as it is called in Iceland, is done in a slightly different way and on a larger scale than in Norway. In Iceland the eider tending is considered more as a part of the farming practice, and the down is collected by the different farmers and sent for cleaning mechanically. The Eider Farming Association of Iceland was founded in 1969. Æðarræktarfélag Íslands – Icelandic Eider (icelandeider.is)