The Faroese chain-dancing and ballad tradition stems from the medieval ring-dance. It is performed without accompanying musical instruments. It is a unique phenomenon within Europe, now maintained only in the Faroe Islands. The practice has three pillars:

1) long ballads running up to several hundred verses. They have a narrative structure with multiple themes about heroes, legends, battles and romance in the Faroe Islands and in Europe.

2) the dance itself. The participant lock each other’s arms and the dance typically begins with a circle. As the dancing comes along, the circle usually forms into sways within the circle. The steps are simple – two steps to the right and one step to the left.

3) the melody of ballad.

There is a leader in every chain-dance that knows all the verses and leads the chanting of the ballads. Leadership is open to anyone who knows the ballad well enough to lead. Dancing is likewise open to all. Even if the participants don’t know the ballads, the storyline of the ballad is attended with great interest by the dancers. If something dramatic occurs, the movement of the dancers and the pitch of the chanting simultaneously turn dramatic. The social structure of dancing and balladry is nonhierarchical. Anyone, male or female, old or young, can break in and out of the chain at any time.

The cultural significance of the ring-dance has been of great importance, and still is today. The storytelling aspect of the practice has played a vital role for the Faroese language. Not until 1854 a written standard for the Faroese language was published. Before that, the practice of chain-dancing and ballad chanting has maintained a rich oral tradition for centuries.

Traditionally the chain-dance and ballad tradition was transmitted within the family, villages and communities. People often worked well into the evenings. During the cold and dark seasons there was a lot of indoor work. This was often combined with oral entertainment. Family and friends would gather inside to spin, weave, knit and tell stories and sing songs. These gatherings are called “kvøldseta” (evening sittings). On holidays and special occasions people chanted the ballads and chain-danced for entertainment. Today, even though “kvøldseta” has diminished, chain-dancing and balladry are still common. It is still practiced at for example at weddings, birthdays, national holidays and Shrovetide. Moreover, it is common to chain-dance in primary and secondary schools up to the fast. 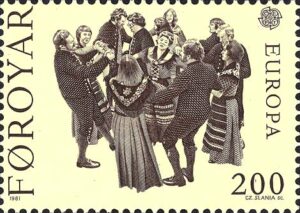 There is a general consensus that chain-dancing and the ballad tradition are a cultural treasure worth safeguarding. It is obligatory in the curriculum across subjects in primary schools and is included by legislation in the Act on Public Education. The official inclusion of Chain dancing and balladry in primary school plays a major role in safeguarding. 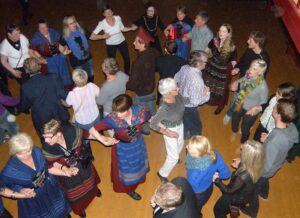 There are many local chain-dancing associations in the Faroe Islands. They are all members of a national Association of Chain Dancers, called Sláið Ring.

Watch a video of a typical chain dance from the associations web page here. 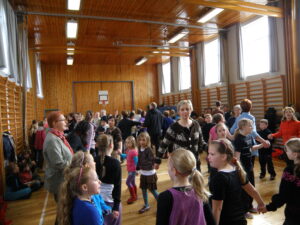 In primary school and secondary school, it is an informal tradition to chain-dance up to the fasting period. Many schools have close ties with local dancing associations, who are invited to the schools to lead the chain-dancing with the pupils. In many instances teachers who are skilled in Chain dancing and the ballads, take it upon themselves to organize the Chain dancing with the pupils in the schools. This way, the active practitioners are transmitting the tradition to the younger generations.

Although widely acknowledged as part of Faroese ICH, the practice has been in slow but steadily decline the last couple of decades. Representatives from the community believe safeguarding measures first and foremost should be aimed at younger children in primary schools, because for this tradition to thrive in the future, they must learn it in the early stages of life.  Nowadays, only a minority of the children learn and practice the chain-dance outside of a school setting.

The transmission of Chain dancing in primary schools, depends to a great extent on the individual teachers’ knowledge, skills, and enthusiasm for the tradition, and thus the quality and volume of this curricula activity varies greatly from school to school. As a safeguarding measure Sláið Ring (National Association for Chain dancers), members from the community, Nám (Center for Educational Services) and Faroe Islands National Museum, have teamed up to develop educational materials for teachers to utilize in their teaching, aimed at all levels in primary school. The teaching materials will especially be useful for teachers, who are not confident in teaching the subject and might lack the skills. A range of teachers’ seminars, where good practices will be collected and subsequently published, has been arranged. The aim is to publish educational materials with a variety of teaching methods, as well as a digital resources platform with teaching materials. The material produced will focus on three areas: 1. oral traditions and storytelling bringing the ballads to life, 2. The Chain dancing itself, focusing on the steps and rhythm, 3. Creative ways of memorizing the ballads and the stories they tell.

Safeguarding Practices The Kvedarseminar – a way of capacity building