Kihnu is a small island on the East coast of the Baltic sea (by size it is the seventh largest island in Estonia), the area of which is 16,38 km2. The length of the island is 7 km, and the width of the island is 3,3 km. The island has approximately 400 permanent residences who are divided between four villages.

The cultural space of Kihnu is complex and continuous, an outstanding peculiarity is apparent in the communal lifestyle, diverse cultural practices and natural environment that have been maintained on Kihnu and Manija islands. Regional identity is expressed through lifestyle and traditional clothing worn on a daily basis; the culture is also expressed through island specific holidays and Kihnu weddings that are sessional or cyclical. 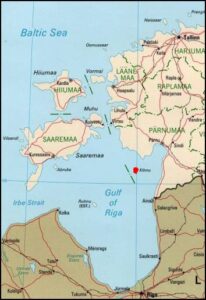 Shaped by the environment

The cultural space of Kihnu represents a population with traditionally island specific cultural heritage, and an specifici sland environment symbiosis, where people are dependent on the surrounding nature and have adapted to the environment through the ages. Local community’s livelihood practices are directly related to the environment and shaped by the unique seaside environment. Due to relatively secluded environment, traditional communal lifestyle has persisted throughout different social and political eras thanks to its ability to adapt. Kihnu island and its population (including those who settled on Manija) has developed into a cultural space like no other, which is unique in the geographical surroundings of the Baltic Sea. However, this small community surrounded by rich cultural heritage and abundant nature has been vulnerable to the  effects of modernization.

The unique culture of Kihnu developed on the island –  and later spread to Manija – throughout centuries in relative isolation, although certain relations to the outer world have had its effects on the culture, especially through maritime affairs. The livelihood of Kihnu has always depended on the surrounding Baltic Sea, it has played a significant role in the development of Kihnu community and cultural practices. From the beginning of time the majority of men from the island have been occupied with seafaring, seal hunting or fishing, away from the island, women have generally stayed home to take care of farming and the household. Influences and innovations brought back by men across the sea, were adapted into Kihnu locals lives by reshaping these according to Kihnu peoples beliefs and customs, thus creating a unique and self-sufficient island culture. Kihnu people created a strong communal identity which they have managed to preserve through multiple socio-economic changes until the present-day problems and changes, thanks to their protective conservatism.

The Kihnu culture of today is a one-of-a-kind mix of past and present, because the unique Kihnu culture has taken elements from their neighbors in Estonia as well as from abroad. Those elements have been interpreted and creatively connected to the context of Kihnu culture. New phenomena and historical strata have existed alongside the old traditions without the new replacing the old. Thanks to the island’s characteristic relative isolation from the mainland, traditional culture and lifestyle has lasted for centuries. It can be said that Kihnu culture is kept alive by moderate conservatism, a belief in preservation of traditional manners, customs, lifestyle, skills etc. Although the development has been dynamic, new phenomena is openly adopted in both local and other cultures. This has contributed to the  viability of the Kihnu traditional culture.

Why is support necessary for cultural sustainability? Identifying dangers and a need for protection

However, this small community surrounded by rich cultural heritage and abundant nature has been eminently vulnerable to the leveling out effects of modernization. Especially in the socio-economic transitional phase which has affected all of Estonia. Due to that, it is crucial for Kihnu cultural space to reach an international audience, to help to sustain and support this one-of-a-kind cultural space in a modern society. The aim of the current application is to find international acknowledgement of Kihnu cultural space by adding it to the representative list of  masterpieces of oral and intangible heritage of humanity.

The importance of education

An action plan was added to the application which put emphasis on the importance of  education in preserving the native culture:

Nowadays individual inheritance of traditional skills is still observable in the family circle, but communal activities also carry a vital role, although modern social context has changed through time. Nowadays the significance of school and local educational programs have increased in the context of preserving traditions.

In accordance with the Republic of Estonia’s educational policies all schools have the right to compose special programs to educate the students about local history, nature, customs, and folklore. In the near future the role of Kihnu intangible heritage in the educational system should increase, because combining the inherited knowledge into a learning environment could create a basis for systemic transmission of Kihnu culture to future generations.

The objectives were defined in the action plan with the estimated budget and persons in charge. The objective was to create an integrated educational plan on the basis of Kihnu culture. Subjects to be taught were:

To reach this objective, there was a necessity for teaching supplies, such as Kihnu history textbook, workbooks, and other supplies. The Kihnu alphabet book needed to be composed with an objective to preserve the Kihnu Language. 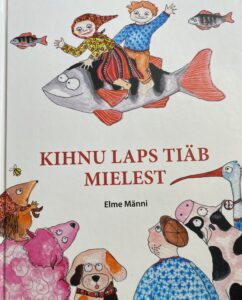 Childrens book. The project has had a focus on publications.

Purposeful arrangement of free time in extracurricular activities related to local culture became important. An objective of hosting children’s camps was also added, to raise the interest and appreciation for local culture, to ensure the preservation of the traditions.

Non-formal education based on heritage:

After the UNESCO approval, in 2004 the “Lugõmik” (educational book for reading) was published in Kihnu language. In the upcoming years more educational books, such as “Kihnu Aabets” (2009), “Kihnlasõ emäkiel” (2015), were published in elementary and middle-school level for continuous language learning. Additional materials for further Kihnu language studies were children’s magazine Täheke (2011; 2016) in Kihnu language, children’s poetry book “Kihnu laps tiäb mielest”, children’s book for pre-schoolers “Eit, aett ning mia” and children’s book “Saessu seiklusõd”. In addition to school textbooks, other publications by Kihnu Cultural Space and Kihnu Cultural Institute have been an important addition in learning about Kihnu cultural history. 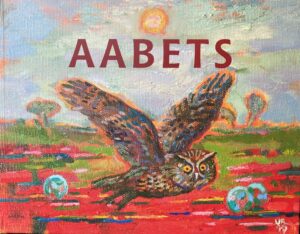 Another example of the publications

In Kihnu school curriculum Kihnu dance and song are listed as a compulsory subjects, in support of which a series of educational materials has been published: „Kihnu laste lauluvihk “, „Kihnu nuõrdõ lauluvihk“, „Kihnu naestõ lauluvihk“ and „Pillilugude vihk“ (song books for educational purposes in Kihnu language).

Starting from 2006. musical instrument camps took place, and from 2008 with a certain regularity several times a year, as a result of which Kihnu Heritage School, a private hobby school is opened in 2013, which has been integrated as a part of youth work and non-formal education since 2020. Kihnu Heritage School’s main focus is on musical instrument learning, such as accordion, violin, guitar, as well as acquiring knowledge about the rich musical repertoire of Kihnu during middle-school studies. Musical instrument learning is one of the biggest successes in recent history, as the majority of children in Kihnu school have been included in this practice. Under the name of Kihnu Pillilpased concerts have been given for tens of years in a local setting as well as off the island, the group is also eager to perform in folk festivals taking place abroad. 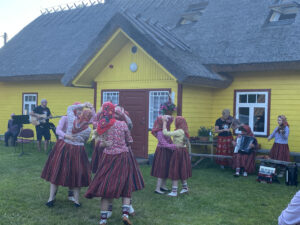 Music is a central cultural element

Strategies and measures to use in heritage preservation practices.

The preservation of Kihnu culture is efficient due to its popularity and activeness, which offers self-fulfilment in folk music, handicrafts and in art. A key factor in constructing the identity is the ability to speak Kihnu language. 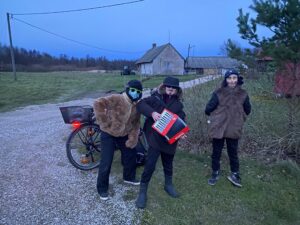 The importance of living traditions. Here from St. Martinus Day

Kihnu cultural education and purchasing of musical instruments has also been supported by other Estonian funds such as Cultural Endowment of Estonia, Gambling tax council or Leader meede (a project funding program). Support has also come from private sponsors or through political decisions achieved through lobbying.

Motivators for preserving heritage can vary, it can be a personal mission, self-fulfilment, or personal gain, both emotional and economic, for somebody.

Any type of external recognition has helped the culture to continue, cultural heritage has been lifted up by research interests by work of folklorists and ethnologists in describing the cultures. Scientific research about cultural heritage helps to preserve and comprehend it, it is important to point out the value in something that may seem worthless and to point attention to aspects that may go unnoticed. 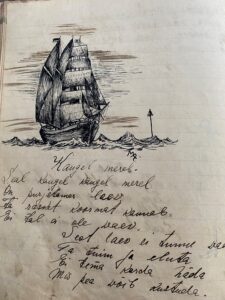 Kihnu Naïve art. On Kihnu the sea is never far away

Conclusion. How did it go? What were the main challenges?

The biggest challenge is the shrinking population, reduction of permanent residents, due to which the number of students in school are also decreasing. Therefore, the number of Kihnu language speakers, Kihnu handicraft practitioners, participants in local undertakings and carriers of intangible heritage is also decreasing. The number of migrants into the island is increasing, which does not guarantee the continuity of the island’s traditional lifestyle. Culture is being institutionalized increasingly, cultural heritage is not maintained only in a natural way, but culture is now being organized, taught with the help of institutions, which could be a local government, school, or non-profit sector. Cultural heritage is not only inherited from the local environment, it is increasingly being taught through school education or with the help of other institutions.

A big challenge is the indispensability of specific individuals, for example when the local violin teacher Kuraga Mari (Maria Michelson) was absent on maternal leave, the educational program had to be halted as it was nearly impossible to find a supplement teacher from the entire country.

On a positive note, much of the heritage has been preserved in a natural way, which is due to the existence of the local community, island region, communal lifestyle, reciprocity in culture, freedom and authenticity and love for the local culture. Kihnu culture is first and foremost a culture where people live for the sake of oneself in conjunction with the local community, not a performative expression for the sake of economic benefits by commercializing the culture.