Medkopis, a honey-gathering season festival, takes place annually at the Beekeeping Museum, founded in 1978, in the village of Stripeikiai (Ignalina District), in a traditional farmstead of Aukštaitija (Highlands, Eastern Lithuania) region. The museum is a part of the Direction of Aukštaitija National Park and Labanoras Regional Park.

For the inhabitants of Stripeikiai village, the beekeeping was one of the most important livelihoods (e.g. in the 14th-19th century, the village used to pay  tribute to the Labanoras manor with honey and wax). The tradition of celebrating the end of the honey-gathering season at the museum on August 15 has been going on since 1984. Usually, at the end of the flowering, beekeepers in Lithuania would invite their neighbors and friends to participate in the honey-gathering celebration to express gratitude to both bees and neighbors for abundance of honey and harmony. In order for everyone to remember the sweet feast for a long time, guests were plentifully served with freshly gathered honey and a Lithuanian traditional drink of mead. If the beekeeper is generous, he can expect to be rewarded with the abundance of honey and health of the bees next year.

Participants of the honey-gathering season festival in Stripeikiai village bid farewell to summer by thanking and revering the bees. The celebration takes place in the 4-hectare territory of the Beekeeping Museum and begins with a ceremony honoring the Baltic mythical bee dieties, together with a folk group setting up the holy fire, welcoming the bees by singing traditional multipart songs Sutartinės, tasting fresh honey, sharing a single loaf of bread to srengthen their fellowship (by the way, the word “fellowship” in Lithuanian comes from the word “bee”). Throughout the day, participants of the festival: folk artists, skillful craftsmen and modern art creators, demonstrate crafts and arts related to beekeeping in 30 creative workshop courtyards oriented to adults, young people and children. The research and expeditionary material on beekeeping is presented in partnership with the NGO ‘Nature Research Centre’, with the particular focus on the recovery of the local bee population (apis mellifera mellifera). The festival presents documentary films, art exhibitions dedicated to traditional beekeeping. There are also music concerts and a photo session of girls named after the Baltic goddess Austėja (guardian of bees), i.e. the performance “Austėja‘s buzz”. It is a kind of  appointing the “ambassadors” of bees. From the early morning there is a honey and culinary heritage fair with about 30 traders. Not only the residents of Utena region and surrounding villages gather to celebrate the honey-gathering, but also the countrymen from all over  Lithuania and the world, as well as all visitors of the Aukštaitija National Park who are interested in beekeeping. One of the most numerous groups of visitors – families with children. A large community of beekeepers from Utena region and Lithuania, about a thousand beekeepers, are involved: amateur beekeepers practicing natural beekeeping and beekeepers professionals raising hundreds of bee families, as well as associations and non-governmental organizations that unite beekeepers (Lithuanian Beekeepers Union, Lithuanian Association of Beekeepers Professionals “Austėja”, Lithuanian Apitherapists Association, Lithuanian Beekeepers’ Confederation). It is a space for sharing knowledge, experience and innovations in the field of traditional beekeeping. 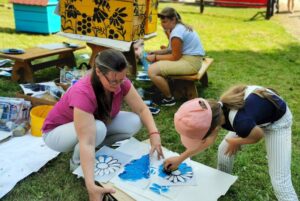 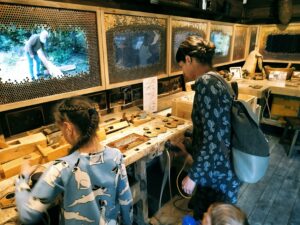 Why safeguard? Identifying threats and need for safeguarding

One potential threat is the impact of popular culture on traditional culture. The number of custodians and bearers of beekeeping traditions is decreasing. Traditional beekeeping crafts become less relevant to modern society, overflowing with consumer cultures. This affects not only traditional natural beekeeping, but also the diversity of spaces inhabited by bees in a negative way (Previously,  beekeeping was with little interference in the life of bees without artificially changing bee mothers,  artificial insemination, working only with the local dark bee. Bees were bred in various hives made of straw, stumps, hives – inlets, bee hive in a hollow of a tree). As attitudes towards traditional beekeeping change, there is a huge threat of losing the local dark bee.  Beekeepers transport bees from foreign lands which are not adapted to live in our environment, thus become susceptible to diseases and require medical intervention. It is necessary to strengthen the perception of the value of traditional crafts (beekeeping) in society and a sustainable relationship with natural diversity in order to preserve the species of local bees, popularize traditional holidays and revitalize crafts. 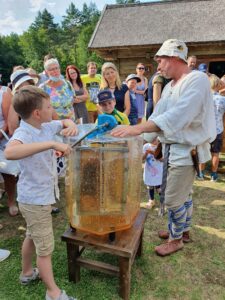 Strategies and measures used in the safeguarding practice

The honey-gathering season celebration Medkopis starts by a ritual dedicated to the Baltic bee dieties. It is followed by diverse programmes, educational activities and crafts demonstrations, which are presented during workshops related to beekeeping in the courtyards. There are also activities aimed at producing and tasting traditional food associated with honey (traditional pastries, gingerbread, decorated with particular regional patterns, weeping traditional mead – the oldest fermented alcoholic beverage with honey), producing ancient hives: straw hives (especially made from rye straw, as antibacterial material), hollowed hives from stumps. Apart from that, honey soap cooking workshops take place. Also, there are activities promoting the use of natural materials: letters writting with natural beeswax, hives painting and decorating with natural paints, making of “insect hotels”  from reed stems (an educational programme for children for nature observing; such “hotels“ can be stored on balconies in the cities). The organisers of Medkopis fair pay great attention to the activities related to production of traditional (not mass produced) natural honey and its products. The fair is attended by well-known beekeepers and honey producers (about 30 traders). Educational activities of beekeepers are carried out by presenting the latest research material on beekeeping, and short hikes are organized to get to know and observe the living nature. Scientific documentaries about beekeeping and bees are presented, and their discussions take place. 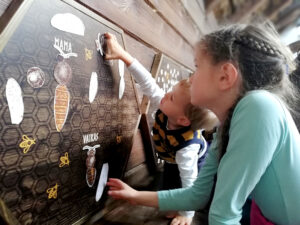 Sharing experiences from the safeguarding activity

Celebrating the end of honey-gathering season on August 15 has become a long-lasting tradition which grew  its community by involving new participants and guests every year. Over the years of its existence, a tradition-loving community of beekeepers has formed, with a particular focus on natural beekeeping (the way bees are grown, where the beekeeper intervenes minimally in the life of bees and the bees are bred in a hive that is most similar in physical characteristics to a hollow of a tree – the primary/natural living space of bees), a learning space for traditional beekeeping has been created, traditional beekeeping, traditional culture and cultural heritage are promoted, and the sustainable development of the beekeeping craft culture in Utena region is maintained, and the heritage products of the Utena region are promoted. Particular attention is paid to mobilising and encouraging supporters of traditional beekeeping (owners of small apiaries up to 10 bee families). The festival is widely represented in mass media, and the activities of the festival are documented and recorded with the aim of transmitting the footage to the documentary archives of Utena region. 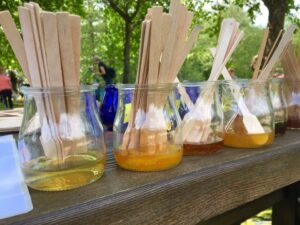 Summing up. Did it work?

The tradition of celebrating the honey-gathering season festival, which lasts for more than thirty years, testifies to the fact that the festival does not only took hold, but also expanded greatly by attracting new participants and guests. The content of the honey-gathering season festival program and the scope of activities have expanded to such an extent that from the local festival it evolved into a widely known holiday in Lithuania. The honey-gathering season festival of 2019 in Stripeikiai was opened and welcomed by the President of the Republic of Lithuania Dalia Grybauskaitė, who donated to the museum the bees she raised herself. Thus, the museum established fellowship  with the President of Lithuania through bees, because it is said in Lithuania that fellows (the Lithuanian word for “fellow“ comes from the word “bee“) who have befriended  through the gift of bees must help each other for the rest of their lives, celebrate  holidays together and share honey. The chosen format of the festival – to grow a community of traditional beekeepers by educating (conveying the latest knowledge and experience of beekeeping science) has been very successful, because beekeepers promoting natural beekeeping have the opportunity to present their beekeeping experience every year and establish long-term relations with the museum by donating two natural hives. The traditional celebration of the end of the honey-gathering season attracts enthusiasts of cultural tourism, thus encouraging the economic development. Most of the Lithuania‘s media widely covers the festival and thus contributes to the traditional event and its promotion. In order to encourage greater participation in the festival, the activities of the event are free of charge, but this also creates financial difficulties in ensuring the continuity of the event.

1. The event has become a long-lasting tradition that creates a growing community

2. Focus on both documentation, transmission and media coverage

3. Promoting the heritage of natural bee-keeping as an example of sustainable development and ecological focus