On Crafting discussion cards are intended for groups that are interested in crafting, and their purpose is to encourage discussions about the meaning of crafting.

The meetings have made it apparent that in addition to the actual making process, crafters also want to and need to share their thoughts and experiences about the significance of crafting. These On Crafting discussion cards have been developed for these situations: they enable comprehensive consideration and verbalising of the significance of handicrafts and crafting culture.

Above: Ideas for discussion card themes, and an example of the contents of a thematic card and a research and experiment card. Visual appearance and layout of cards © Elina Ahonen.

The purpose of these cards is to inspire and encourage enthusiastic crafters to verbalise and share their experiences and views about the significance of handicrafts and crafting culture.

The discussion cards open up new perspectives to crafting. The themes of the cards bring up views to both the traditions of handicraft and the future of crafting, as well as create depth to the art of making today.

The discussion cards give crafters the opportunity to determine the cultural heritage of crafting. Discussions based on these cards guide people to think about what they want from crafting and to look after the handicraft culture that is important to them.

The idea behind the On Crafting cards is that there are many paths to crafting and many ways to craft. The objective of the cards is to help one recognise, with other crafters, the meaning of handicrafts to oneself, communities and society.

The card series has specifically been designed for situations where a group of people come together to craft, for example for handicraft clubs or crafting evenings, or for when inspiration is needed for craft studies. 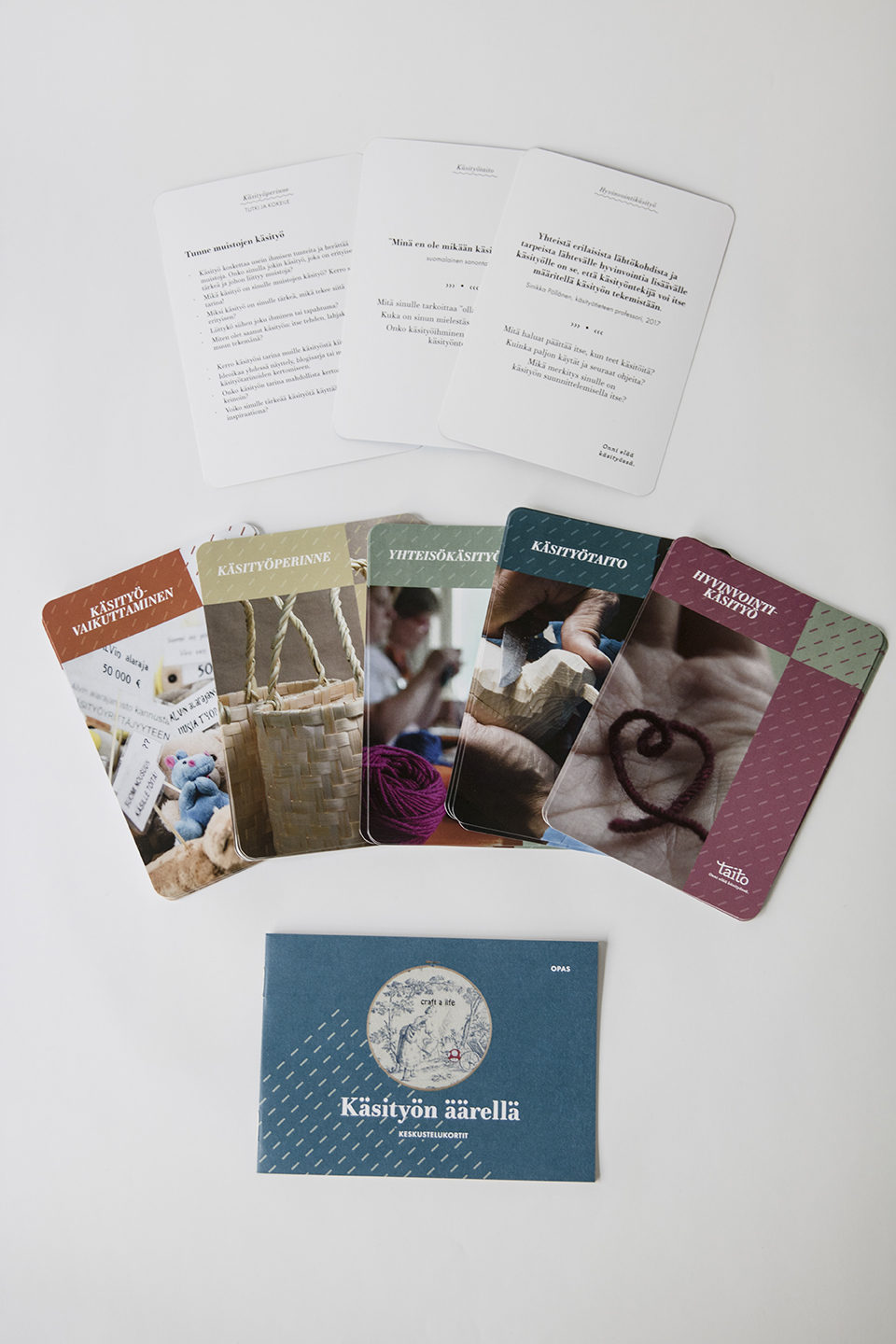 There are five themes in the discussion boards.

The cards feature five themes: handicraft traditions, handicraft skills, communal crafting, wellbeing crafting and advocacy through crafting. These card themes are perspectives to the crafting culture. Each theme has 16 cards, and each card has a thought or a statement related to the theme as well as questions about it. The pack of cards contains ten Explore and Test cards, two for each theme. The contents of these cards inspire to explore and test things, come up with new ideas and implement the themes in practice. The pack of cards features 90 cards in total: 80 theme cards and 10 Explore and Test cards. The package also contains an instructional leaflet that explains the themes of the cards and their backgrounds as well as gives tips for using the cards.

The card deck contains 90 cards and a booklet.

Discussions and thoughts can be built around the themes of the cards, or you can pick and choose the most important themes or expand the discussion based on the ideas and questions that are brought up. The participants’ experiences of crafting and their craft products are easy to link to the card themes. It is important that the method of using the cards will be adapted to the group and that the themes are handled on the group’s own terms. The discussion cards can also be used alone, as inspiration for thoughts, experiments and making.

Inspires and encourages crafters to verbalise the significance of crafts and discuss about it with other crafters. 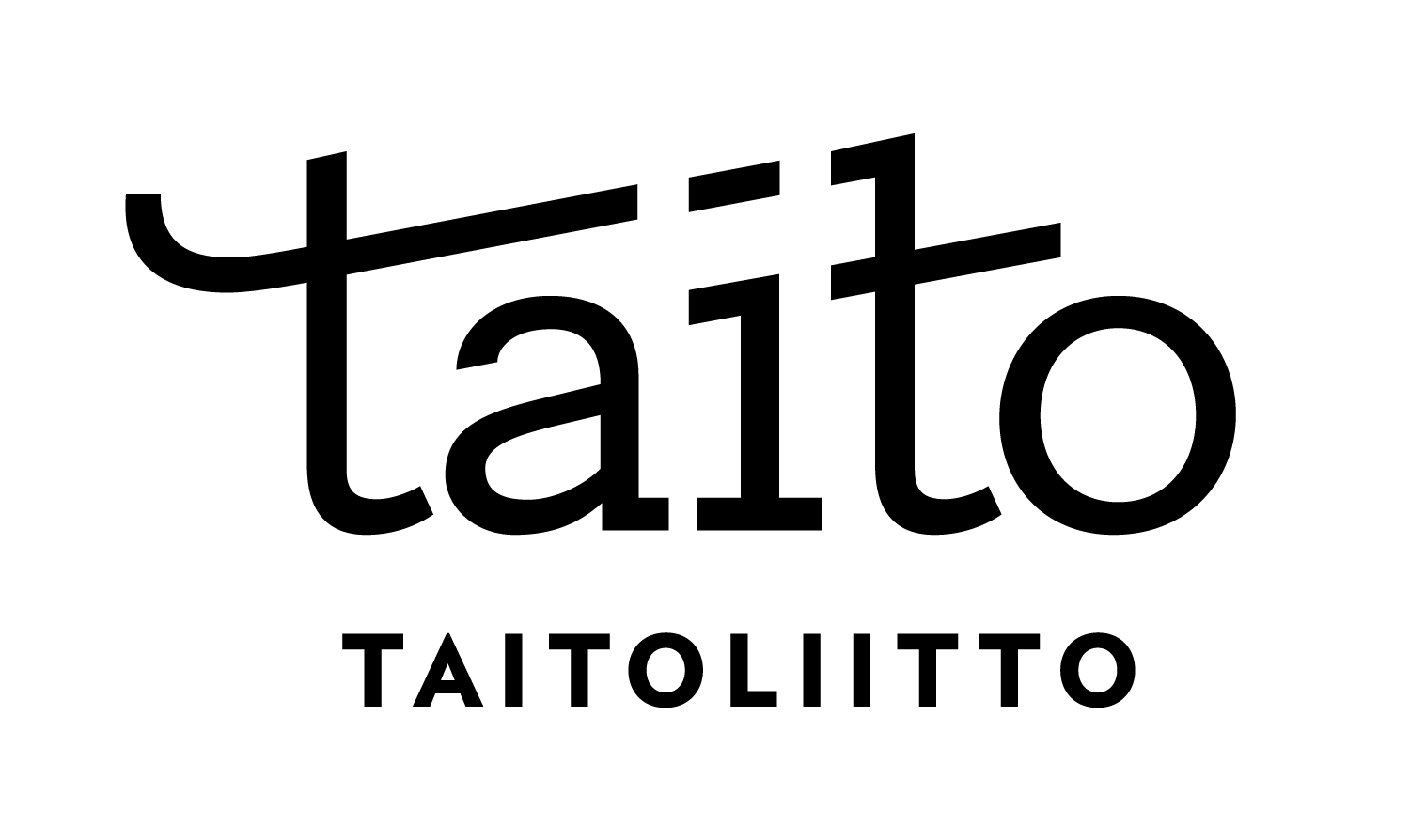 The Finnish Crafts Organization Taito
The organization promotes crafts related skills, education and business. Taito Group is a nationwide organization composed of the Finnish Crafts Organization Taito and regional crafts associations. Taito Group is an active producer and developer of crafts services and culture, aiming at providing well-being, rewarding experiences and craft skills at every life phase. The Group’s values are creativity, skills, entrepreneurship and sustainability. Taito Group influences crafts policies by actively investigating topicals of the field. Taito Groups’ network includes 17 crafts associations, which serve yearly over 130,000 customers. Annually almost 4,000 youngsters participate Basic Education of Arts, and fairs and exhibitions attract above a million visitors. The organization has published The TAITO magazine continuously since 1907. For crafts entrepreneurs, the associations offer opportunities for sales and exhibitions, as well as training and consultation. The 20 regional Taito Shops provide an attractive market for local crafts entrepreneurs. Taito is coordinating the Circle of Crafts in Finland that is part of the Implementation of the UNESCO Convention on ICH bringing together several actors in the field.
Contact: Kikka.Jelisejeff@taito.fi Visit web page