In Lithuania, sauna is commonly known as pirtis. The tradition of attending pirtis in Lithuania has been around for ages. However, by the beginning of the 1990s, it was all but extinct – and only practiced sparingly in the countryside, with no communities to keep the traditional pirtis alive. As time went by, this has changed. The resurgence of pirtis can mostly be credited to NGO “Pirties akademija” (Sauna Academy), founded in 2003 (renamed into “Lietuviškos pirties akademija”, which means Lithuanian Sauna Academy, in 2010). This organization has focused on organizing pirtis master courses and maintaining its community on the website Pirtis.lt. As the attention to this community and its activities spread, so did the courses. 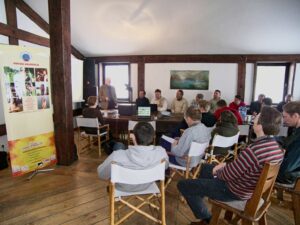 To help everyone get the full scope of knowledge required to run and maintain a pirtis, the “Lietuviškos pirties akademija” started including more investigative and creative topics. The health-related topics included whisking, bodywork, and the creation and maintenance of a health-conscious pirtis microclimate. More technical lessons focused on things like pirtis and furnace construction.

Doing this for nearly two decades, the “Lietuviškos pirties akademija” set a foundation to maintain and grow the Lithuanian pirtis tradition. The community sought to strengthen the traditional holistic pirtis practices, where only natural aromatic materials are used, and a relatively low (around 60⁰C) heat is being maintained by pouring water on the heated furnace stones, and the body is both heated (by moving the air around) and massaged by using whisks – natural brushes, handmade from the branches of birch, oak, maple, linden, juniper, aspen, hazel, and other trees. 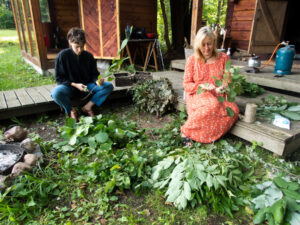 Whisking is the most important, interesting, and perhaps the most impressive procedure of the Lithuanian pirtis. It’s a deeply relaxing bodywork, combining heating, massage, and aromatherapy, and sometimes a ritual on a special occasion, such as Summer Solstice, birthday or a wedding.

The Academy’s students are acquainted with different variations of this procedure. Whisking is also often combined with some other procedures, such as cleaning, scrubbing, massaging using honey, salt, clay, oils, herbal extracts, and other natural substances.

Overall, including whisking, heating, and cleaning, pirtis is a form of collective bathing that usually takes around 4 hours. However, in the modern world, the practical, hygienic purpose of pirtis is much less important than it used to be. So, the Academy’s courses focus not only on practical skills but also help its attendants to obtain knowledge of psychology, history, culture, allowing them to combine rituals with events.

Such an approach is getting more and more popular. Now, every year, the Academy’s courses are visited by several hundred people. Its activity has inspired the inception of other communities, following similar goals and principles.

Students and alumni of the Academy are being united in the “Pirtis Mastership Club”. The “Lithuanian Steam Pirtis Fellows”, founded in 2009, unite the casual fans of pirtis, and in 2018, “Association of Professional Pirtis masters”, uniting the professionals was founded as well. As time went by, a community of professionals and casual fans has formed and is currently spreading its knowledge all across Lithuania. 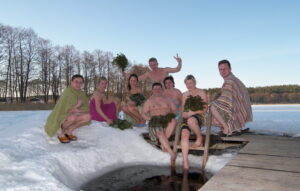 Why safeguard? Identifying threats and need for safeguarding

As the lifestyle of people has changed, so did pirtis – it has lost its natural hygienic purpose. It is currently seen as a means of relaxation and communication. Family, clubhouse pirtis is becomming more popular, so it is a common practice to hire a professional pirtis master.

To keep the tradition of Lithuanian pirtis getting stronger, it’s crucial for it to eventually develop and adapt to the change of lifestyle: it has to be practiced in families and local communities, and masses of new people have to be allowed to join it.

The first thing threatening the tradition of Lithuanian pirtis was the lack of natural skill and knowledge transition via direct experience, i. e. that most of current pirtis masters had to actively seek the information, instead of getting it passed on naturally by their friends and family.

The second, and currently the most obvious threat, is excessive government interference and regulation. Lithuanian pirtis is equated to SPA services, and they have to conform to strict and often unrealistic SPA hygiene norms. In 2020, the state pirtis master occupation classification was introduced. Although a formal vocational training program is a positive thing, but it also causes danger for the informal pirtis education to be destroyed: those who wish to learn the skills of Lithuanian pirtis, are forced to finish formal education before being allowed to simply use pirtis together with their friends and families.

It’s also important to note, that excessive information may also be a threat, as not all ideas found online or in the media may be genuinely traditional. Some of these may even cause harm to both the people and the environment.

At this stage, it’s important to encourage people not only to be active participants in the tradition of pirtis visiting, but also to be its cherishers and creators – a part of the community. It’s very important to both keep the specifics of the tradition alive, and also to accept new ideas. The ideas could make the key aspects of Lithuanian pirtis better, and help combine the old tradition with the new lifestyle and opportunities.

For that, it’s important to maintain informal pirtis education a priority, making sure that the tradition is created and passed on by as broad and diverse group of people as possible. It’s also important for it to be practiced in various settings, and smaller communities, so it can be enjoyed by all, including children.

The Academy organizes uninterrupted informal pirtis mastership training, that can be joined at any time. Intro seminars are announced once or twice a month. There are both theory lessons and practical training in pirtis. Various forms of education are offered, ranging from remote online lessons to several-day camps, visiting various interesting bath houses.

The entire course takes up to 200 academic hours, but each student is allowed to choose just how much of that course he wishes to complete. Those looking for a quick brief about healthy pirtis, can take up a one-day theoretical and practical seminar, and those who wish to be able to conduct Lithuanian pirtis events for their friends and family, are offered a 50-hour Family Pirtis Master course, giving them the key practical skill and knowledge.

In the course, people are taught about pirtis traditions, whisking, other bodywork techniques. A lot of information is focused on botany – knowledge about the plants, and using it to your advantage. Another important part of the courses is about pirtis construction, microclimate, and stoves. 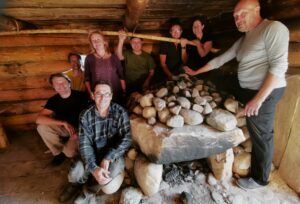 Learning the art of constructing the stoves Photo: Rimas Kavaliauskas

The Academy does a lot to promote not only pirtis tradition itself, but the traditional saunas, ancient periodical burning furnaces, and smoke saunas as well.

For those who wish to know more about the Lithuanian pirtis culture and learn the traditional pirtis techniques, there are English courses organized both in Lithuania and abroad.

The Academy represents Lithuanian pirtis abroad as well – via its long-term membership in the international Sauna Association, as well as organizing international sauna culture conferences.

Through the 17 years of activity, the Academy has directly introduced pirtis to over 5,000 people and prepared dozens of professional pirtis masters, who directly went on to create other pirtis culture communities.

In 2008, “Lietuviškos pirties akademija”, seeking to further popularize the art of whisking, organized the world’s first national, and later, international whisking championships. Later, they became popular in other countries as well.

The Academy was also one of the main initiators of 2010 “Pirtis Day”, an annual festival (now organized by “Lithuanian Steam Pirtis Fellows”), which unites both pirtis masters and enthusiasts.

Since 2014, Lithuania is the only country in the world with a weekly national TV show, focused on sauna. In 2020, the Lithuanian pirtis was added to the list of Lithuania’s national intangible heritage.

The Academy’s activity has changed and highlighted the role of the pirtis master. If previously, the master’s main purpose was to maintain the pirtis, gather the supplies, and organize bathing, the role is very different now. The master now has to do various personal and group procedures, and the services of a professional pirtis master can be booked at the sauna of your choosing. More and more people apply the traditional pirtis practices for personal use, going to pirtis with their friends and family members. 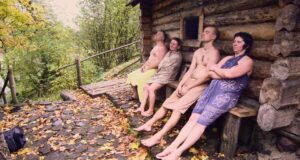 Summing up. Did it work?

The tradition of pirtis visiting is certainly alive and rejuvenated. The new creative generation of pirtis masters continue their work separately and independently, adding new people to their ranks. There’s a bigger variety in how pirtis is being attended, knowledge and experience can be passed on through group sessions, personal learning, or by hiring a professional pirtis master.

Despite many ways one can get knowledge about pirtis, its place in the country’s public life is still mostly unclear. The government’s approach to this phenomenon rarely meets reality, and its decisions often do more harm than good.

Saunas are usually assigned to being tourism or accommodation, having to adhere to  unrealistic standards. Accessible saunas are scarce, and traditional Lithuanian pirtis is extremely hard to make legal. While the Lithuanian pirtis is stronger than it was just a few years ago, there’s still a lot of work ahead.

The inventory of the rich intangible cultural heritage in Lithuania can be found in this link.