Within the region of Ostrobothnia, Finland, a lack of big NGOs in the area of intangible cultural heritage (ICH) was noticed. There is an abundance of small associations, especially general local heritage associations, in the region. They have an interest in ICH, but do not have the means to dive into safeguarding in the sense of the 2003 convention. The project Kulör was initiated as a response. Kulör was run by KulturÖsterbotten, a joint municipal organization for 14 bilingual (Swedish/Finnish) municipalities in Ostrobothnia. Kulör has aimed at awareness raising, and promoting that intangible cultural heritage is a resource in the present through innovative approaches to safeguarding.

All activities within the project have either been planned or executed as close collaborations with established organizations within the region. The project period was April 2017- April 2020.Kulör was planned by KulturÖsterbotten as a directive by the regional LAG Aktion Österbotten in order to establish activities aimed at safeguarding ICH. The project was funded by the European Agricultural Fund for Rural Development through the Leader program and by the Swedish Cultural Foundation in Finland. The total budget was 122 000€ and two employees took turns functioning as project manager part time. The project arranged, or took part in, approximately 50 event activities of various nature, which reached about 2000 participants.

“Open web” during the Night of Arts in Vaasa 2018. Kulör arranged embroidery graffiti in collaboration with the regional handicraft association, using traditional motives as inspiration

Associations started to contact the project for inspiration and assistance in planning events with connection to ICH. Kulör has also been proactive in suggesting collaborations and new initiatives. The idea was to pick up initiatives where resources aimed at safeguarding are of interest.

Kulör have focused on different approaches to transmission of traditional knowledge, e.g. through workshops or collaborations between practitioners and schools. The project has often contacted organizations arranging different types of events where add-ons aimed at practical knowledge have widened the program. The project has also encouraged documentation, both as a means for archiving and spreading information concerning practical knowledge.

In a sense, the purpose of Kulör was to rock the boat concerning how people are used to creating activities in proximity to ICH. Instead of arranging handicraft demonstrations, the project encouraged and planned popup workshops. Instead of giving a speech of changing Christmas traditions, Kulör arranged exhibitions of mumming costumes through the ages and prompted visitors to discuss experiences of the traditions. Instead of exhibiting folk art, the project reinterpreted motives in workshops where traditions were discussed and made part of the personal experience. In addition, the project activities were documented and conceptualized. 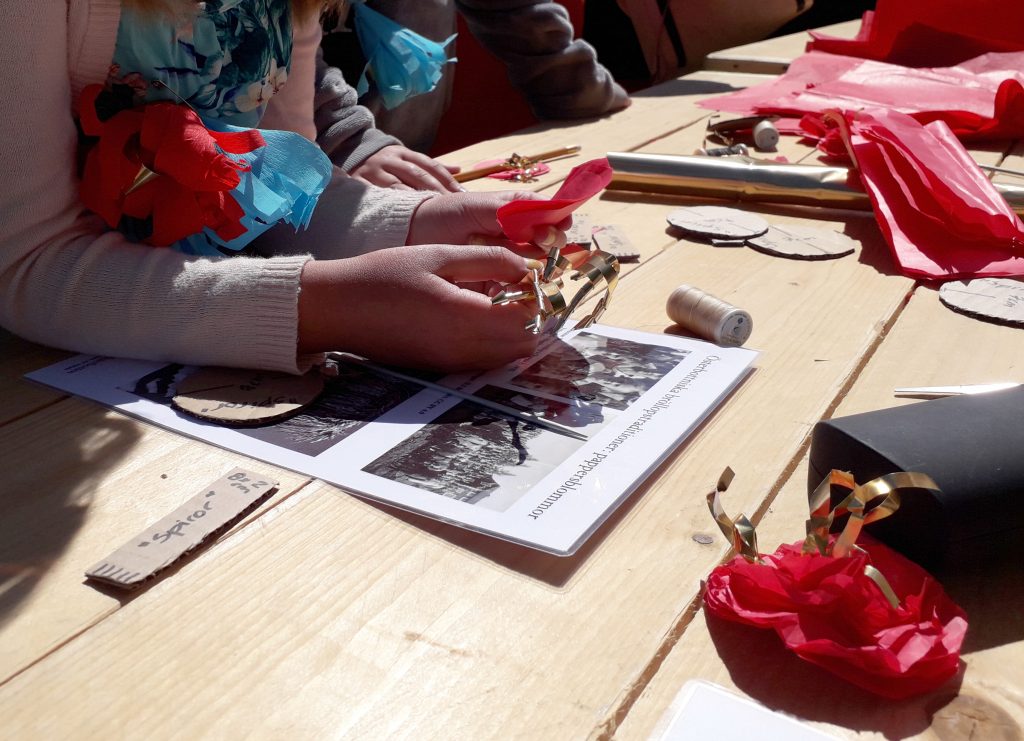 Workshop during the Dance Festival of the Finland-Swedish folk dancers 2019 in Jakobstad. The local hosts asked for activities including traditional paper flowers used at weddings. Kulör created easy to use models and an information pack providing historical context for the flowers. Workshops were offered at the main event of the festival, and paper flowers could be seen throughout the audience.

The guiding star of the project was that the results of all efforts should be shared. The project management created manuals for how to do pop up-workshops, exhibitions and documentations. Step-by-step instructions for crafts, such as traditional paper flowers used at weddings and simplified tassels inspired by traditional costumes, were produced. When background research was done in connection to project activities, it has also been included in manuals or published online as separate information packs. In addition, social media was an important channel for the project to spread awareness of living traditions in the region, information about the project activities and of good examples of safeguarding.

At the end of the project it is evident that the material created is used in varying venues, resulting in more than 7000 downloads. Once there are examples set for how ICH can be an appreciated part of various activities, this trend is spreading. Here you can find the material bank produced by the project and get inspired.

A central agent with broad, existing networks takes the position of a resource for all interested collaborators.

Explicit aim to collaborate with established associations and organizations. The work is not done only within the project itself, but in order to expand and enhance existing activities.

Share everything produced, directly to primary collaborators, but also digitally. Create manuals and templets out of the activities and share them in order to reach a larger audience over a longer period.