Since the settlement of Iceland in 874 hens were kept and raised by the people who settled the country. The breed was easy to keep as it was considered low maintenance. The breed adjusted well to the climate and conditions and ate almost anything. The eggs from the hens were an important nourishment in people’s food intake. In the 1960s when production stocks were imported to the country for commercial production of eggs and poultry the traditional Icelandic hen breed was almost extinct. Thanks to the awareness and visionary work of people who took interest in the traditional Icelandic hen the breed was kept alive.

In relation to changes in society and more awareness in regard to climate changes, sustainability and responsible consumption the keeping of the traditional Icelandic hen has been revitalized. Growing interest is now among households in cities and towns to keep traditional Icelandic hens in their backyard for domestic use, making their consumption of eggs more sustainable and environmentally friendly as well as enjoying the colourful character of the hens. 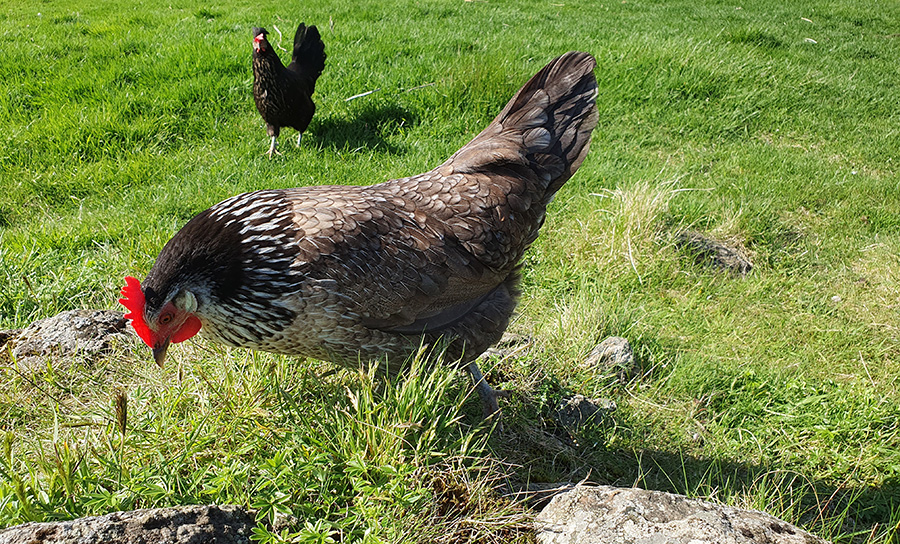 This color is called „gráflikrótt“ in Icelandic. Photographer: Jóhanna Harðardóttir

The Icelandic Chicken Owner and Breeder Association (ERL) has preserved important knowledge of both keeping and breeding these hens. The association hosts seminars every year for the public, publishes guidelines and news and commits to the wellbeing of the traditional landrace. With its work ERL has facilitated the growing interest in domestic keeping of the Icelandic hen, ensured the viability and transmission of the tradition and knowledge.

The Icelandic Chicken Owner and Breeder Association (ERL), founded in 2004, is the only association in operation in Iceland which aims at preserving and transmitting the knowledge in regard to the landrace, i.e. the traditional Icelandic hen.

One of the best safeguarding practices in relation to preserving breeds of domestic animals is to find them a purpose, which can be diverse. For many keeping the traditional Icelandic chicken can be of great social value as well as a visionary work in keeping the stock’s vitality. The birds provide eggs for domestic use of the family, sometimes providing for other homes as well and allowing the owners a small-scale retail of eggs. Finding and giving the stock a purpose in peoples live is likely to facilitate sustainability of the breed. 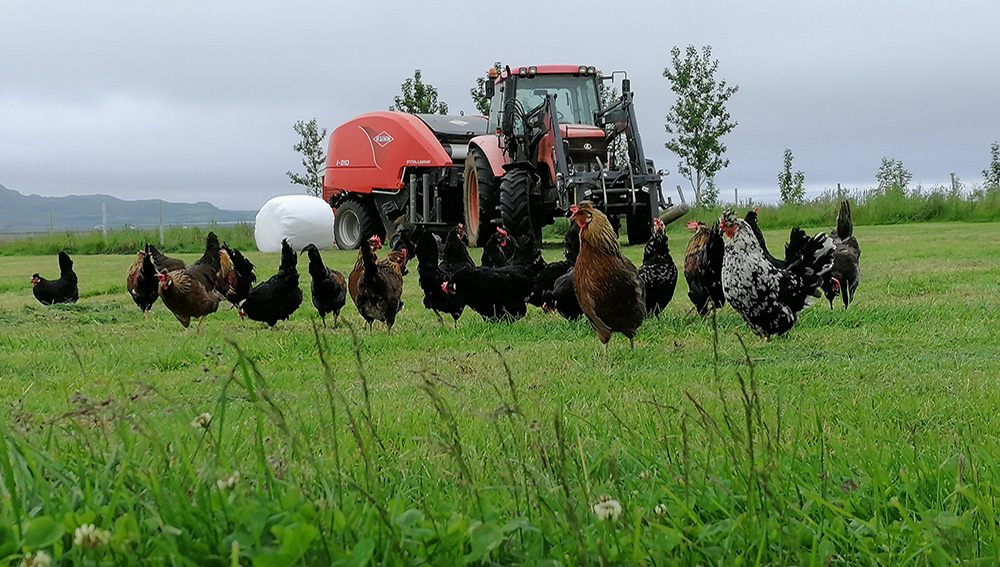 Icelandic chicken of the population „Andrésarstofn“ promenade on a field on an Icelandic farm of the summer 2019. Photographer: Halldóra Andrésdóttir

One of the main purposes of ERL has been to transmit knowledge in relation to the traditional Icelandic hen. The emphasis has been on the knowledge of hen keeping and care taking. ERL has also educated people about the history of the breed and the purpose of hen keeping in the past as well as addressing the important issues regarding hen keeping in modern society. In its work ERL has also emphasised how to preserve the characteristics of the breed, for example its multiple colour diversity as well as other characteristic. That is done by ensuring that the traditional Icelandic hen is not interbred with other poultry breeds. ERL has issued and applied regulations and breeding standards so breeders in Iceland need to apply for certification. ERL keeps a list of its certified breeders in Iceland who adhere to the standards and safeguarding of the breed.

Ever since ERL was founded the association has collected information and documents about the traditional Icelandic hen. With this a collection of substantial amount of knowledge regarding the bird’s keeping, their breeding etc. has been gained. ERL has made it its priority to make this knowledge accessible to the public using various methods. ERL has its own webpage www.haena.is and a Facebook-page (“Eigenda- og ræktendafélag landnámshænsna”) where information is provided. ERL also publishes a yearly journal (Tímaritið Landnámshænan) about its operation and articles about the Icelandic hen. In addition, ERL hosts seminars on a regular basis for its members, as well as new members. Informal exchange of information and knowledge also takes place between the members of ERL, as well as when individual members pass on their knowledge to people interested in the bird. Every year ERL hosts its general assembly where members meet to discuss the current matters of the hen and to elaborate on aims for the upcoming year. Every year ERL also hosts exhibitions on the Icelandic breed as well as arranging and offering the public to come and visit a member who keeps the bird. These events are advertised publicly.

ERL has approved regulations regarding the breeding criteria and the physical appearance standards of the breed. ERL offers its members an inspection and keeps a list of certified breeders who adhere to the standards of ERL. This certification is made to ensure the wellbeing of the hens as well as safeguarding the genuineness of the breed itself. 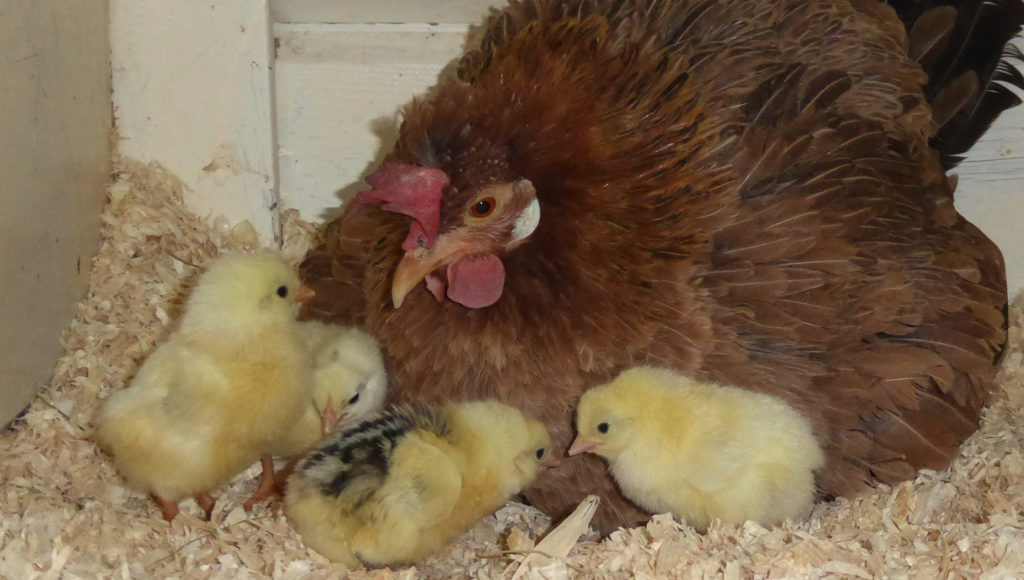 Keeping hens in an urban environment has gained popularity in recent years. Growing number of people are now keeping a few hens from the Icelandic breed in their backyard. The growing interest in keeping hens is the result of more awareness and interest in the breed, as well as growing interest in sustainability and environmentally friendly consumption. A growing emphasis on sustainability can be seen as a driving force behind this progress. As said before the hens are easy to keep and feed largely on domestic leftovers, minimalizing food waste. Hens kept in backyards need a small shelter and a well-equipped confinement where they can walk around freely. The keepers gain eggs from the hens for their personal use but sometimes the hens provide more eggs then the homeowners can use, allowing them to sell or give away the excess eggs. Some breeders have subscribers (who themselves are not able to keep hens but are interested in the breed and a sustainable consumption) who come once or twice a month to collect eggs. Here it is also worth noting that for the last decade or so many municipalities in Iceland have taken important steps in allowing domestic keeping of hens in urban areas.

With the foundation of ERL people who were interested in the traditional Icelandic hen joined forces. The work of ERL has raised awareness regarding the importance of the Icelandic breed, its good qualities and value for domestic households and society as a whole. Without the professional and visionary work that ERL has undertaken in its operation knowledge about the hen keeping might have been lost.

Throughout its work, ERL has emphasized education about the keeping and breeding of the traditional Icelandic hen. Through its publishing, seminars and education the knowledge regarding breeding and keeping of the hens has been safeguarded and transmitted to new people interested in the hen.

With growing awareness for sustainability, animal welfare and responsible consumption people started to think of ways that would limit food waste from households and ways to conduct their food purchases and consumption in a more environmentally friendly manner. The keeping of traditional Icelandic hens seems to be in line with and support such goals. Thanks to the groundwork of ERL interested people could now easily seek information, help and assistance from ERL. Simultaneously they have also formed a new community with people who share the same vision and interest.

With the growing interest in the traditional Icelandic hen and through the work of ERL many municipalities in Iceland have made it possible for the inhabitants to keep hens in their backyard. 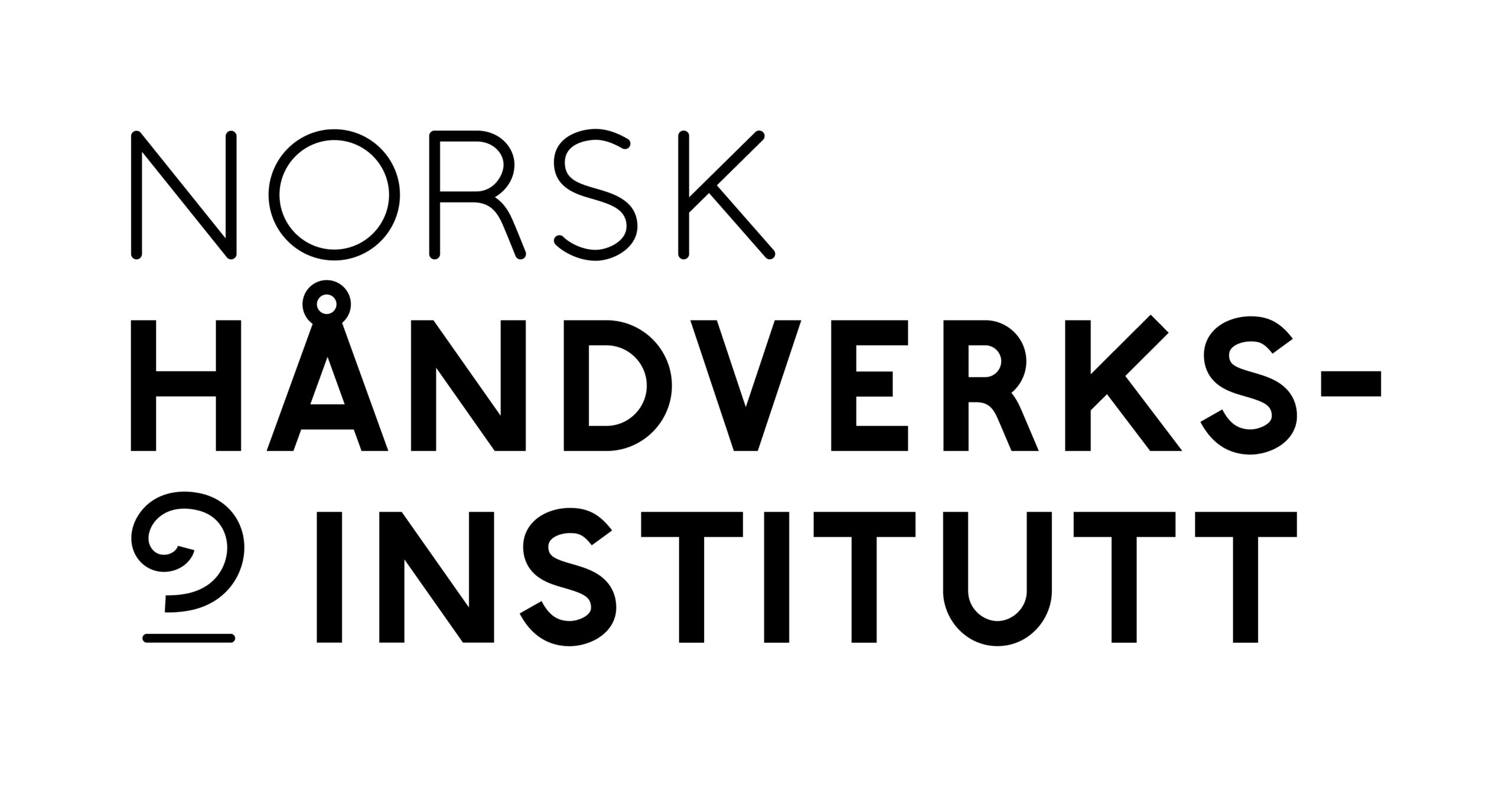