The Interdisciplinary Art Group SERDE is a non-governmental organization (NGO), which seeks to develop the regional and international collaboration between different cultural fields, organizations and professionals.

SERDE center is located on the main street in the historical centre of Aizpute – one of the oldest towns of Kurzeme surrounded by rural communities and with a population of 3500, 2 hours’ drive to the West from Riga, the capital city. The centre occupies and has preserved a unique house complex (1500 m2) built in the 18th century in wood and red-brick architectural style. 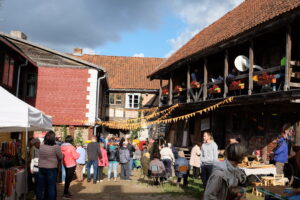 The residency centre was started in collaboration with Aizpute Municipality and State Inspection for Heritage Protection, namely Kurzeme region division, with the aim to protect and restore this unique house complex. SERDE’s work in restoration field was recognized in 2007 by society with the “Annual Award of Cultural Heritage” given by the State Inspection for Heritage Protection. In 2015, the house complex was inscribed into the list of state protected cultural monuments (Nr. 9104).

SERDE is the first NGO from Latvia that has applied to become accredited to the UNESCO 2003 Convention and has been accepted by the General Assembly of States Parties in 2016. The organization is situated in Kurzeme region in Western Latvia, in a small town named Aizpute.

Since the establishment of the organization in 2002, it has become an inspiring example of interconnections explored between scholarly research in traditional culture, and artistic activities. The organization is studying living memory and life histories, thus having significant experience in fieldwork, as well as artistic residences and workshops, with an overall objective to encourage dialogue between the arts, scholarship, and education, often in international networking frameworks.

Through the regular fieldwork in rural areas SERDE collects life histories and personal stories about recent historical events and about traditional skills inherited from earlier generations. These were crucial during the Soviet period because of very limited access to consumer goods. The stories collected demonstrates how particular skills were carried forward from the period preceding World War II and maintained during the Soviet period when many items had to be made at home. 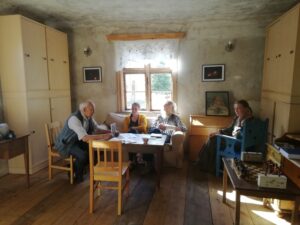 SERDE collaborates with ICH experts, artists, students, and scholars. Preparing for the fieldwork the ICH experts design lists of questions and interview informants, while artists document the process, the milieu, and the participants. Fieldwork, which culminates in presentations and workshops for the communities, raises awareness at the local, national, and international level about the importance of intangible cultural heritage. 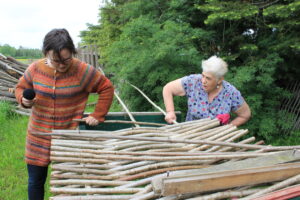 Interview in the expedition in Dunalka. Photo: SERDE

SERDE has also collaborated with the Latvian National Commission for UNESCO and provided folklore study opportunities for UNESCO Associated School Project teachers and youth from Alsunga and Riebiņi counties. This project was implemented by inviting students and teachers from the corresponding counties to participate in the fieldwork under the guidance of ICH experts. Local elders were interviewed about local history, the Soviet period, seafaring and fishing, beer brewing, beekeeping, traditional food, and many other things. 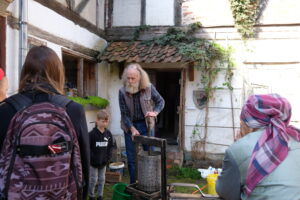 All the results of research done by SERDE are published in attractively designed series of tradition notebooks named ‘Notebook on Traditions’ (Tradīciju burtnīcas). Some of them has got enormous success and are out of the print now. Almost all those publications have been presented to the local communities and individuals in a project closing events bringing together everyone involved in the fieldwork.

SERDE was established in 2002 in Aizpute, a small rural town in Latvia.  In 2005, SERDE began to collaborate with researchers of folklore and traditional culture in response to the perceived loss of important living practices and memories. This activity included fieldwork/expeditions to rural areas of Latvia to investigate traditions—maintained from generation to generation—and to collect stories about recent history still preserved in living memory. The gathered materials were published by SERDE in a Notebook of Traditions book series (currently 23 books, although the process is ongoing) in which two distinct themes emerge: 1) the preservation of living practices and 2) the preservation of stories/memories.

The principal method employed by SERDE is fieldwork/expeditions, inviting specialists of folklore/living culture, artists and students to the chosen rural areas. The folklore specialists compile questions and organise interviews whilst artists document the environment, processes and people. The gathered audio interviews are later transcribed and together with colour photo documentation are designed and printed in book form. Public events are held to celebrate the book publication including a presentation of the book and additional hands-on workshops with reconstruction of old recipes or storytelling events in which the local community are invited to publicly recount their personal stories. 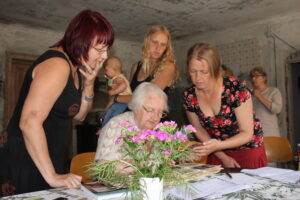 Free copies of each publication from Notebook of Traditions series are delivered to the Latvian National Library and local libraries in Latvia. To resume the documentation of intangible cultural heritage in communities, it is important to mention that in all Notebook of Traditions publications dialect characteristics, as well as use of various local words and expressions have been respected. Except first two books, the rest openly recognise and identify various people who participated and shared their knowledge.

From our observations, such expeditions and later presentations promote and support the capacity building of locals on how to carry out such research and how important it is to document the process. And this is the most important aspect of all the expeditions carried out by SERDE – to organize a closing event and once again bring together all the people met during the expeditions. SERDE’s experience in the safeguarding of intangible culture heritage is based on close collaboration with communities and individuals who are willing to share their stories and skills. 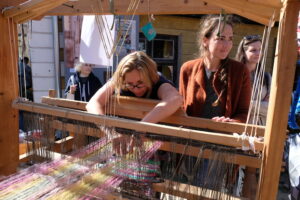 SERDES’s creative and innovative approach to the intangible cultural heritage work was recognised with the Latvian Folklore Grand Prize in 2007 and local history nomination in 2015 by the national poet Imants Ziedonis foundation Viegli.

1)  ‘The School of Local History’, started on 2020 as annual event for specialists and enthusiasts to come together to learn how to find and preserve the living practices, stories and memories.

3) Training programmes for the community and enthusiasts who are willing to learn more about the traditional skills such as wood restoration, ancient beer brewing and foraging of herbal teas.

4) The non-formal transmitting of knowledge is provided in the program ‘Live like a local’ with the guided tours in the historical town Aizpute, visiting the SERDE houses complex, workshops and many local inhabitants who live in historical environment and have interesting stories and some specific traditional skills to share with. These safeguarding activities teach the local community and visitors to evaluate their cultural heritage and to preserve it. 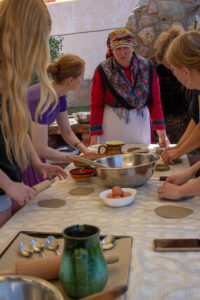 Analysing the positive impacts of the post-expedition events for the local community, it can clearly be seen how the process positively affects the contributors by means of the value and esteem attached to their knowledge. It disseminates the knowledge and links generations. Our experience shows that workshops often attract visitors who also wish to share their knowledge and a younger generation who are eager to learn, hence a transfer of knowledge and preservation of skills continues to take place. It could be argued there are potential negative aspects to this work, for example where some practices (strong alcohol making) cross the borders of legality.

SERDE believes its preservation practices are important and vital because knowledge is slowly disappearing for a variety of reasons such as new regulations and laws concerning food and drink production, the development of consumerism in Latvia and generational change. Activities like fieldwork and expeditions that culminate in presentations and workshops for the community in which the knowledge was gained.

Videos from SERDE are found here