Suiti is a small (~2500 inhabitants) catholic community (nowadays consisting of three villages – Alsunga, Jūrkalne and Gudenieki) in Lutheran western part of Latvia and because of the religion difference are sometimes called a Catholic island. In this religious isolation a distinct identity has survived through centuries.  The history of the formation of Suiti culture goes back to the events of the 17th century. 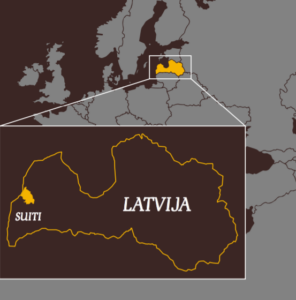 The Suiti cultural space is characterized by a number of distinct features, including vocal drone (Burdon) singing performed by Suiti women, wedding traditions, colourful traditional costumes, the Suiti language, local cuisine, religious traditions, celebrations of the annual cycle, and a remarkable number of folk songs, dances and melodies recorded in this community. Older forms of extended family structures are still common here, and such families, where the transfer of skills from generation to generation takes place, are important bastions of Suiti cultural heritage. The Suiti people are very proud of their distinct identity and character.

Since 2009 Suiti cultural space has been included in UNESCO List of Intangible Cultural Heritage in Need of Urgent Safeguarding.

Identifying threats and need for safeguarding

The period after 2009 the Suiti themselves describes as a Suiti Rennaissance, because the UNESCO status has contributed to the preservation and promotion of many different elements of Suiti culture: traditional instruments playing (bagpipes, kokle, drums), men’s singing, traditional crafts making, making and wearing of folk costumes etc.

However, the safeguarding of Suiti cultural heritage is under serious threats for many reasons. Such issues as changes in people’s lifestyles and urbanization, natural resources overexploitation and even global climate change has led to a declining population in Suiti and the disappearance of many traditions in the everyday life of Suiti.

For these reasons the cultural heritage itself is changing significantly, many traditions are disappearing or transforming. The environmental issue is also a topic in intensive agricultural and livestock farming nowadays as implemented by large entrepreneurs.

The decline of the Suiti community raises serious concerns about inheriting Suiti traditions and preserving the cultural space. 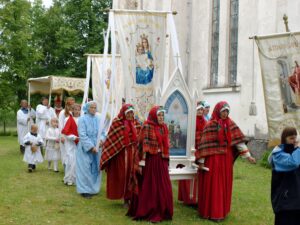 The main objective and goal of the Suiti community is to preserve its traditional cultural heritage for the next generations – as authenthic as possible. 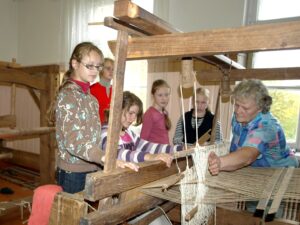 1.To enhance and ensure preservation of the Suiti ICH and its transfer at the levels of pre-school, general, interest and vocational education, as well as through lifelong learning.

2. To ensure urgent safeguarding measures for protection, restoration and popularisation of the endangered elements of the Suiti ICH.

3.To facilitate research and publicity about the Suiti ICH.

4. To ensure recovery and restoration of buildings representing historic and cultural value necessary for activities of preservation and popularisation of the Suiti ICH.

5. To ensure long-term sustainability of the Suiti cultural space.

Some key factors. Sharing experiences from the safeguarding activity.

After Suiti cultural space was inscribed in the UNESCO Urgent Safeguarding List, the safeguarding activities have significantly complemented each other, and mutual stimulation for new initiatives has been observed . For example have non-governmental organisations  become more active and home production have developed. The Suiti have strived to put their knowledge and skills to use, for example  in the field of education and research, in the making of traditional costumes and the playing instruments. Also the skills in project development and attraction of investments have improved, as well as the ability of the community to determine priorities, develop ideas and attract funding for implementation.

During the preceding years Suiti have established co-operation with other communities in Latvia and outside Latvia. Such co-operation has become a valuable gain for the getting-to-know of cultures, exchange of experience and strengthening of the community, as well as attracting international funding. 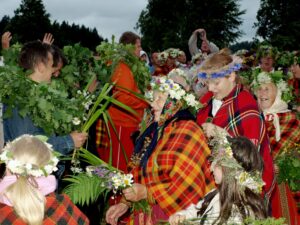 Summing up. Did it work? Experiences and challenges.

The results of safeguarding activities were influenced by several challenges.

Human resources of the community are limited, and contribution of each person is significant. Therefore, the inability of any person to continue work is a loss for the process of inheriting. People outside the community were engaged in implementation of individual activities, however, the motivation for their contribution is less enduring, and accordingly the community chose to sustain its own human resources and also to involve them, for example, in educational initiatives.

In order to safeguard the Suiti cultural space it is particularly important to involve children and youth in inheriting traditions where the role of the family is gradually taken over by education. It is necessary to attract and hold the interest of children and youth according to their age, taking into consideration new methods of education, and also the possibilities offered by new information technologies.

It is necessary to ensure succession for the planned activities. The heritage safeguarding activities implemented by the community are mainly based on specific and short-term activities’ projects, with an accordingly focused financial investment. It allows carrying out of individual initiatives, however, a more stable and financially more extensive support programme would be preferable for purposeful long-term safeguarding of the Suiti cultural space.