Historically, the Faroese boat has had immense importance for living conditions in the Faroe Islands. The boat has been used for fishing, fowling, whale hunting, in agriculture and for transportation between the islands. Even though the commercial use has been considerably reduced, the Faroese boat is still being used in fishing and for leisure pursuits, as well as in the rowing competitions. The Faroese boat is part of the intangible culture belonging to most people in the Faroe Islands. Many people own a boat or know someone who does. 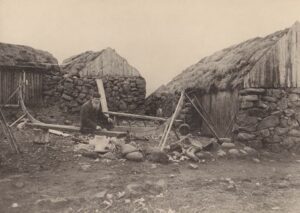 The characteristics of the Faroese boat is the construction with keel, boat planks and rowing gear. A clinker-built boat has its keel raised, and the planks are subsequently added edge upon edge and riveted together. The boat is formed gradually as the planks are added. The keel is from oak, and the boat planks are from spruce, pine, or larch wood. 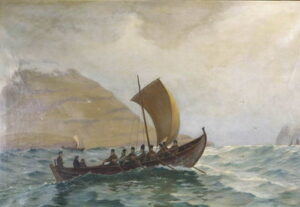 The origin of the Faroese boat is the Nordic clinker-built boat with approximately 2000 years of history. It is believed that the Faroese boat got its beautiful, seaworthy shape in the middle of the 17th century. Lucas Debes writes in 1673 that “…some practice boatbuilding, building the most beautiful boats, light and very advantageous in these dangerous seas, so that the Norwegian boats cannot be compared to the Faroese ones.” The Faroese boat was used for all transportation and for fishery. The boat was adapted to the conditions making it seaworthy and light. In many places the landing conditions are difficult, and where the coastline is steep, the Faroese boat was well suited because it is stable at sea and light to haul ashore.

Faroese boats are not built according to a fixed design, but according to measuring stick, key measurements, and traditions from older skilled craftsmen and by the builder’s eye. A person could call himself a boatbuilder after apprenticeship with an older boatbuilder for two winters and subsequently having built twelve boats. Originally boats were built out of doors. Boatbuilders would travel from village to village with their tools, building boats on the spot. Later other bigger tools were added, and the boats were built inside. The knowledge and skills of boatbuilding were passed on, and special professional environments with boatbuilding as the main profession, were to be found in the Nólsoy and Mikladalur.

The social significance of the Faroese boat changed in the beginning of the 20th century when it was substituted by bigger boats and ships. However, the Faroese clinker boat is still a significant and visible part of Faroese society.

In Tórshavn the City Council has reserved the innermost spaces at the boat bridges in the harbor – on the Kongabrúgv – for Faroese boats so that they are easily admired, lending a charming atmosphere to the harbor area. 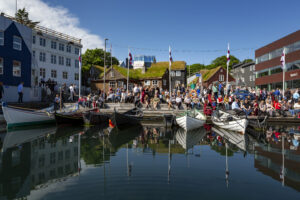 Several interest groups organize lessons in rowing and sailing for children and young people. They also organize activities and trips with Faroese boats. The organizations do great work by spreading knowledge about the Faroese boat, as well as about rowing and boat building. 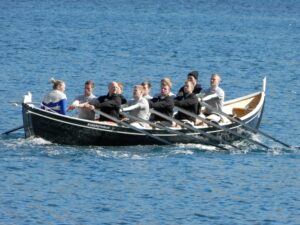 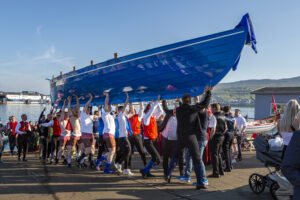 Boatbuilders receive visitors, both Faroese and foreigners, and several projects are being planned to create living museums with boats and boatbuilding.

The future of the Faroese boat traditions

There is great interest in the Faroese boat, and given all the activities instigated by individuals and associations its prospects seem good – at least for some time. 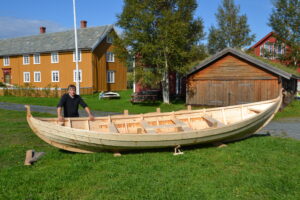 The “boat of the year” for 2020-21 at the museum Kystens Arv ( Coastal Heritage) in Norway, Trøndelag County is a faroese boat. The boat is a “fyremannafar” made by faroese boatbuilder Hanus Jensen. Photo: Museet Kystens Arv

The National Museum (Tjóðsavnið) collection of pictures and documents about the Faroese boat, www.tjodsavnid.fo

The “boat of the year” for 2020-21 at the museum Kystens Arv ( Coastal Heritage) in Norway, Trøndelag County is a faroese boat. The boat is a “fyremannafar” made by faroese boatbuilder Hanus Jensen. Årets båt – Kystens Arv

The state parties in the Nordic countries have nominated Nordic Clinker Boats traditions to be inscribed on the UNESCOs Representative List of the Intangible Cultural Heritage of Humanity. Read more here: Nordic Clinkerboat Traditions (nordicclinkerboats.org)