Collecting folk traditions in Kainuu has a long tradition itself, but the collection work has diminished since the 1960s. It was important to promote the natural continuation of the story tradition to the next generations. The stories in the Upper Kainuu Story Atlas were collected by interviewing 81 people and by consulting archives.

There were still people who could travel effortlessly to the old superstitious world view, and collecting tradition produced both magical stories that had not been recorded before, as well as small absurd local stories spiced up by unusual and original village characters. The most unique features of Upper Kainuu are present in stories describing poverty, remoteness, wilderness, beasts and the terrors of the borderland. The stories describe battling harsh nature, starvation and cruel enemies. Fear of death, war, disease and human distress have forced people to find models and solutions to explain them. Each village had its wise man or woman and healer, sometimes even several. The knowledge is not based on book learning, but on experience. Humans have subtly interpreted the signs of nature.

A particularly vital part of the old beliefs and traditions in Upper Kainuu that has remained has been forecasting the weather and reading omens of death. People have forecast weather based on signs such as the length of a frog’s leap, and a forest bird arriving in the yard at home has been seen as an omen of death.

One of the goals of the Upper Kainuu Story Atlas was also to organise living history activities with the story tradition and modern art into a product that interests nature and culture tourists, and increases local people’s pride in their home area and their knowledge about history.

The main goal of the Upper Kainuu Story Atlas was to organize living history activities combining the story tradition with modern art into a product that attracts tourist, whether they focus on local nature or culture. The product should also increase local people’s pride of their home region and as well their knowledge about history.

The Upper Kainuu Story Atlas was implemented as a general development project for rural continental Finland, administered by the municipality of Hyrynsalmi from 2009 to 2013. The municipalities of Suomussalmi, Puolanka and Ristijärvi participated in the cooperation.

The publication created in the project, ‘Korpimuseo Wildwood Tales’ (Municipality of Hyrynsalmi, 2013), is a collection of folk tradition, a piece of artwork, a hiking guide, an atlas, and a live roleplaying game. The work includes 313 sites in the terrain with the related stories and hiking information. The whole work has been published as an ebook and a set of electronic maps with tracking.

The work has been designed and compiled by Satumaarit Myllyniemi. Sari Hiltunen created the drawings for the work, Eero Tuovinen wrote the live roleplaying game ‘Researchers of the Julenius Archive’, Mikko Alapuro translated the work into English, and Kari Salonen customised the hiking maps. The ‘Folklore Comic Strip’ drawn by Sami Myllyniemi from 2004 to 2013 is also linked to the project. 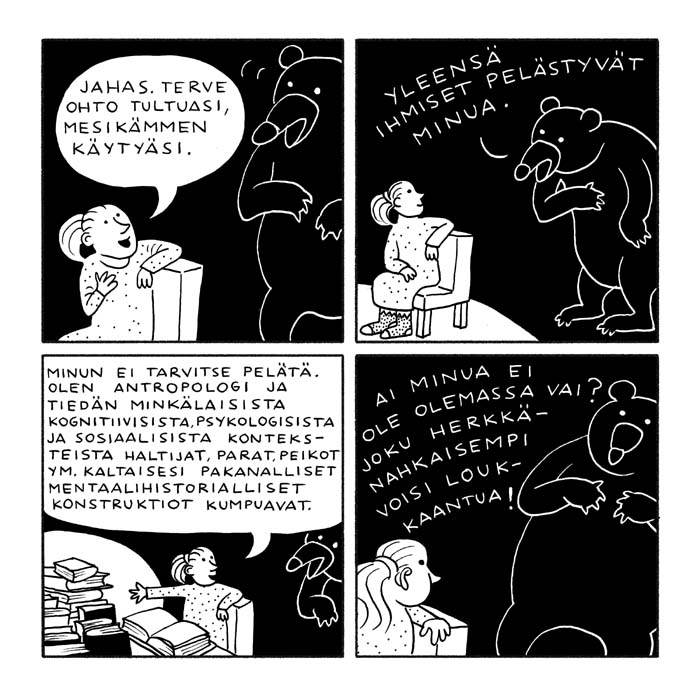 1. Hail thee, Otso, forest-apple, bear of honey-paws and fur-robes.
2. Most people are afraid of me.
3. I don´t need to be afraid. I´m an anthropologist, and I know the cognitive, psychological and social contexts that elves, spirits, trolls and other constructions of pagan mental history like you stem from.
4. You mean I don´t exist? Someone more sensitive might be offended!
From the ‘Folklore Comic Strip’ by Sami Myllyniemi.

The project was created based on an authentic natural environment, cultural landscape and story tradition, from the point of view of sustainable development.

The Upper Kainuu Story Atlas remains live online, and it will benefit local communities in the future. The contents from the project will be productised in the coming years through the development project by the LAG Living Kainuu LEADER NGO, among others.

Satumaarit Myllyniemi was granted an award for meritorious actions related to bodies of water by the association Oulujoen Reitti ry in 2013 for compiling the Upper Kainuu Story Atlas, and she received the Elias Award of the Elias Lönnrot Association in 2014.

The project links spiritual folklore and physical locations by means of modern technology.

This kind of project is possible because of Finnish high-class archival culture and long tradition of collecting folklore.

Country:
Finland
Author:
Upper Kainuu
Kainuu (Swedish: Kajanaland) is one of the 19 regions of Finland . Kainuu borders the regions of Northern Ostrobothnia, North Karelia and Northern Savonia. In the east, it also borders Russia. The atypical regional geography and landscape consist of lakes, hills and vast uninhabited forest areas. Culturally Kainuu is part of larger Eastern-Finnish cultural heritage. The dialect of Kainuu is based on Savonian and Karelian dialects.
Contact: satumaarit.myllyniemi@gmail.com Visit web page