The Sámi river boat is a traditional shallow-draft boat used for transport along many of the river systems in the tradional Sámi regions of Norway, Sweden and Finland.

The river boat was previously the most important means of transport for the population along the upper part of the rivers Tana/Teno and Kárášjohka with its tributaries, in the municipalities of Karasjok/Kárášjohka, Tana/ Deatnu and Utsjoki/Ohcejohka in Northeastern Norway and Finland.

The river boat was also of great importance to the Kven population (of Finnish decent) in among other places the Porsanger area to the northwest.( Editors comment)

The traditional river boat was built only for rowing and staking along the rivers. In recent decades the boats have been adjusted with transom for outboard motors. 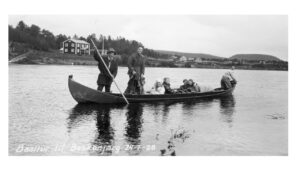 Those who did not build boats themselves, obtained these from the many boat builders that existed along the Tana watercourse and in Karasjok until the 1970s – 1980s. Today, the number of boatbuilders have decreased dramatically.

Those who has told about their boat use, have told that they started learning to use a boat already as children. Most mastered boat use from the age of 10-11. Many have also trained younger relatives to use a boat. Previously, most of the members of a household mastered the use of boats, both women and men.

Boats for fishing and transport

The river boat has been and still is important in connection with fishing in the rivers. In the spring, river fishing with nets for grayling and whitefish would make a welcome supply of fresh fish. Throughout the summer fishing for salmon was the main activity.

The traditional methods used for fishing for salmon were weir and gill nets, drift-net and seine-fishing.  Fishing from a boat with a rod has been more common in the Tana watercourse than in Karasjok. Eventually, angling from land also became common. Salmon fishing was an important source of income for the population, including rowing  fishing tourists .

In net fishing, four or five people usually work together in a net team, which usually belonged to the same family, relatives or were neighbors. In Tana, a net-team could consist of neighbors from both the Finnish and Norwegian sides. In this way they could fish from one bank to the other across the river. When weir-or barrier-fishing (stengselsfiske in Norwegian, buođđu in Northern Sámi) , 2 people could form a fishing team and an experienced fisherman could tend the nets alone. Two types have been used, meardeboađđu and joddoboađđu. Barrier fishing is still practiced in the river Tana. 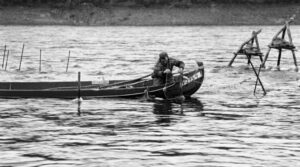 In Karasjok and in many of its tributaries, the method were still in use in the 1990s, but are used less frequently today. Communal nets were also used e.g. Beaŋgirstengselet in Karasjok. It was intended for farmers from Karasjok. Both drift-net and seine fishing are prohibited in many of the rivers. Fixed nets (ståfiske in Norwegian) is the most common of the traditional fishing method still in use.

In addition to fishing, the river boat was essential for different kinds of transport needs. Previously, the boats were used for the harvest of hay, reindeer moss, timber and the gathering of other natural resources. 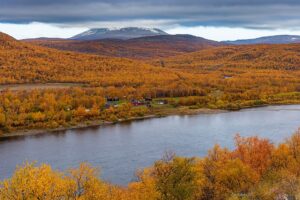 To preserve the knowledge of both building the river boat and the rich intangible traditions connected with its use, a boat building course and documentation project was launched. The project was funded by the Sami Parliament the Norwegian Cultural Council, UNESCO and RiddoDuottarMuseat.

The museum association RiddoDuottarMuseat arranged the course in river boat building at the Sámi Museum in Karasjok for six course participants. The participants built six boats in July until September in 2016. There were five men and one woman among the course participants. There were more applicants than available places in the course, so the youngest applicants were given priority. The course teacher was master boat builder Jouni Laiti from Utsjok in Finland, on the Finnish side of the Tana river, close to the border to Norway. 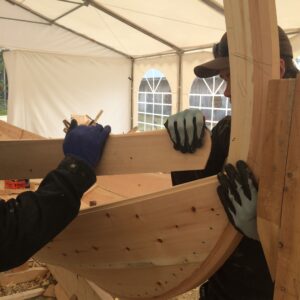 During the course, the students learned to build river boats that have been and are used in the upper part of the Tana watercourse and in the rivers in the Karasjok area.

The course was conducted in Sami and was part of a project with the aim of documenting, preserving and disseminating traditional knowledge about the construction and use of river boats, as well as the preservation of Sami boat terminology. An important partner in the collection was Porsanger Museum in Lakselv, Norway 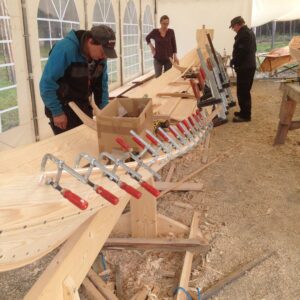 The first two weeks of the course were conducted in Utsjok in Finland at boat builder Laitis’ workshop. There, the stem, keel and frames were set and prepared  using traditional clinker-building methods

The remaining work was carried out at the outdoor museum in Karasjok during eight weeks. 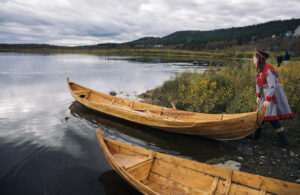 In connection with the course an extensive material of film, photos and audio recordings of informants were gathered, in addition to material on Sami boat terminology. The film, text and photo material was been edited for exhibition purposes. 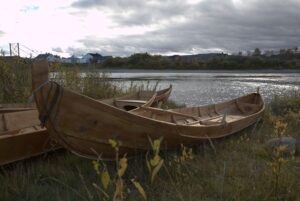 The river launch of the boats in the river Karasjok attracted a lot of attention and during the course period in Karasjok, the work tent was also frequently visited by both tourists and locals. The latter were particularly involved in following the construction of the boats and in exchanging knowledge and experiences with the students and the course teacher. Many people stopped by to look at the progress of the work

In connection with the course, the museum has had the opportunity to collect, document and disseminate valuable intangible cultural heritage about boat-building and traditional use.

After this course, new courses and restoration of older boats have been conducted, in both the Sàmi and Kven communities in the area. New courses have been held in the municipalities of Porsanger and Nordreisa in Norway. Some younger boatbuilders (some of them have boatbuilding as a tradition in the family) are taking up the tradition in these areas. Building boats are often done as a part-time job, especially in the winter time. There is hope that the inscription by Unesco (se below) can lead to more focus on the diverse boat building traditions in the north and renewed safeguarding measures. (Editors comments).

This tradition is part of an old and diverse boatbuilding tradition  : the building of boats using the clinker technique. This important intangible heritage was inscribed on the Unesco representative list of the intangible cultural heritage of humanity on the 15th of december 2021. (Editors comment)

Learn more on the diverse boat building tradition in the Knowledge Bank of intangible heritage in Norway , by Arts Council Norway here

Other articles on clinker boats :

Safeguarding Practices The traditions of the Faroese Boat

Author and contact:  Berit Åse Johnsen. Part of this article is previously published in Karasjok årbok/annual.